It was up early this morning, as we had a visitor. It was the carpet fitter. We had decided to have new carpets fitted to Derwent6. Our home had always been a NO SHOES boat, but the carpets were eight and a half years old and just looking a bit faded after all the coal, mud and dust put on them over the years. Steve the fitter arrived at 9.00am and had cut the carpet to fit in the saloon and the bedroom.. 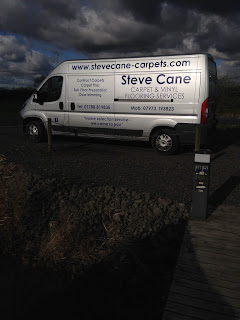 After removing the old carpet it was found that the underlay was still in tip top condition, which saved us a few bob.. 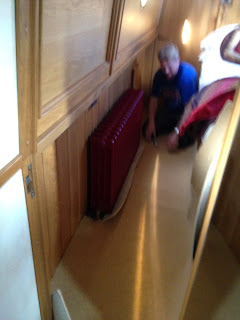 We were really happy with the first carpet which was stain free and would even take diluted bleach to remove stains, so this carpet was the same..
Steve was with us for three hours and we were very pleased with the results, but someone else wasn't very happy.. 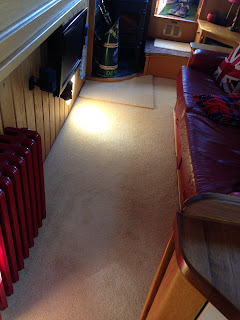 See if you can spot him in this picture. 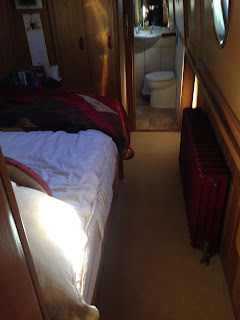 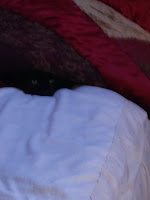 Tooty hid under the duvet all the time Steve was here, Tooty scaredy cat!
After a bit of lunch we then had the tidy up operation.. Carpet fibres were everywhere, and our little Dyson struggled to cope.
Del was set on doing the brasses and polishing down one side as it was a lovely day. It paid off as Derwent6 now looks great again.. 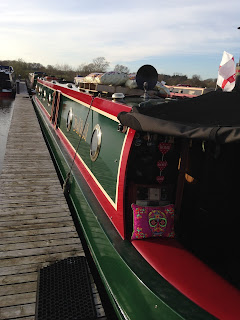 In the evening we went out for something to eat, making the most of it whilst we still have the car ..

We enjoy reading the boater blogs and yours is a welcome read. So you are getting the boat like a new pin for your future adventures. Chas n Ann xx

Cool, I'm sure it's going to serve you well ;) By the way, I'm beyond excited, as I just decided to do a big home refurbishment aberdeen next week and I just can't wait to see the results already!
Cheers ;)

I have been searching for such informative blogs since a while and I am very much glad that I have found it on your website...
guide to fitting underlay

We enjoy reading boater blogs, and yours is one of our favourites. So you're purchasing the boat as if it were a new pin for your future trips...