On Saturday we had another one of those hot nights, portholes open, sheets off trying to get some air.. but we did manage to get a few hours.. We thought we would do some cleaning jobs and Al wanted to go shopping for some bits in Windsor.. We then waited... We were waiting for a long time friend Paul and Sam to arrive on the train and they turned up at 4.00pm. It was so great to see them both.. 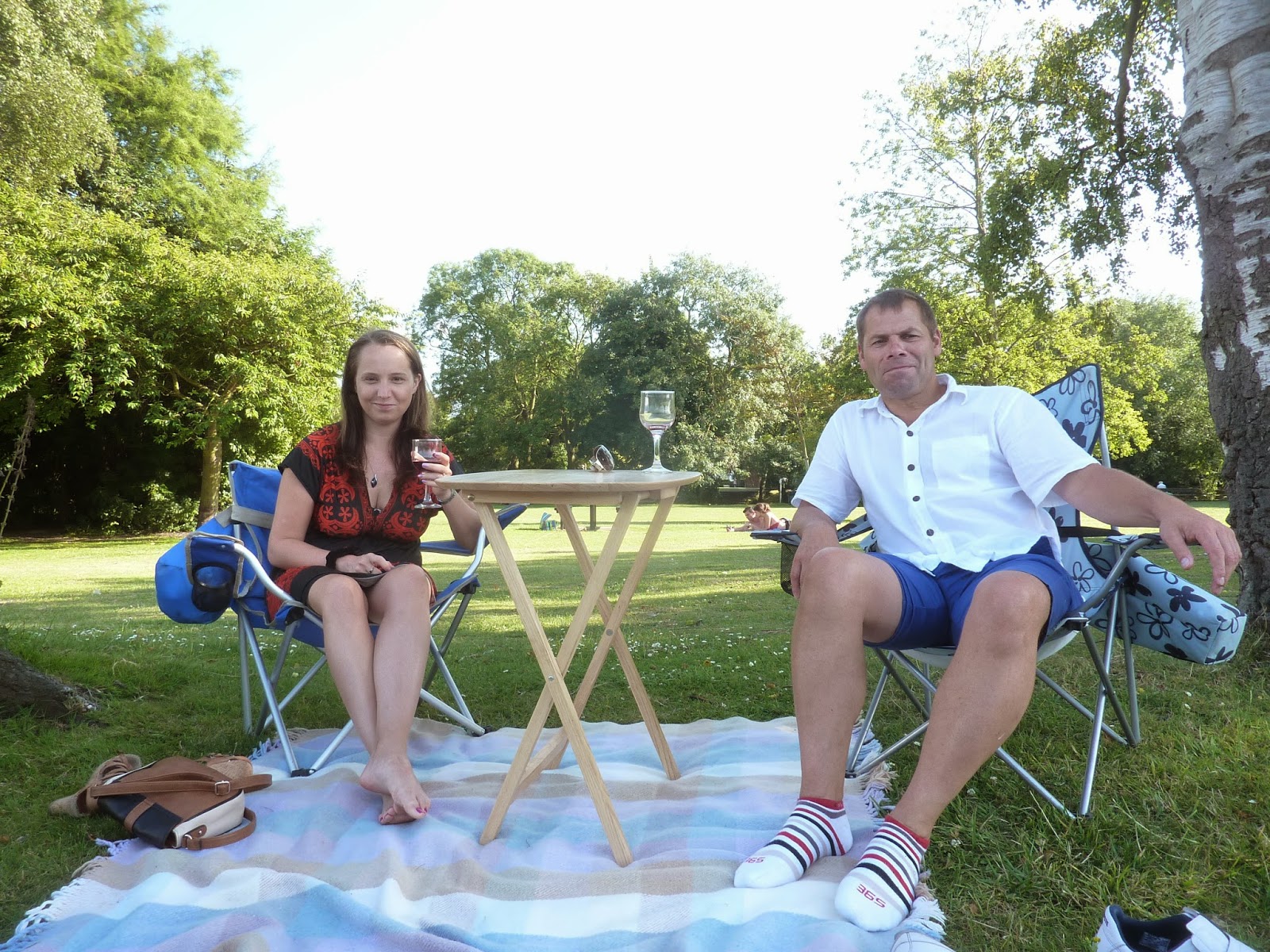 They turned up with a couple of bottles of wine so you could see how the rest of the weekend was going to go... The sun had come out and we sat in the park and cratch chatting away and trying to catch up for lost time, with the wine of course..
As it was Saturday we booked a table for later on in the evening and walked into town to Carluccio's. We were still chit chatting all night long finding out about their travels and ours..  Paul and Sam very kindly paid for the meal which should have been our treat, so a very big thank you guys 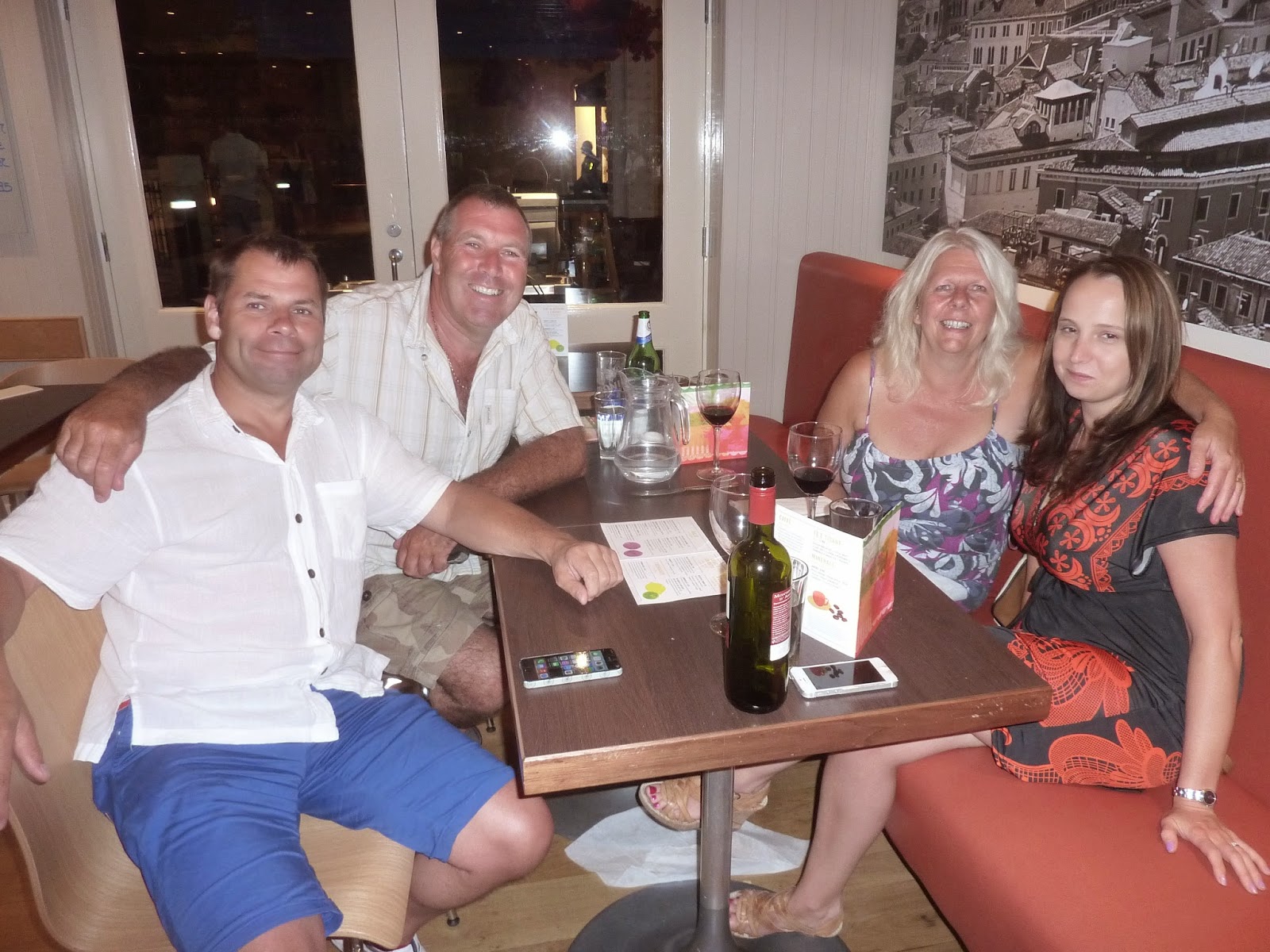 So more wine and beers later, we walked to All Bar One where we finished off the evening with some G & T's, and when we were thrown out of there we walked back to Derwent6.. We still had another drink before we crashed into bed at 3.00am, yes sorry guys we were a bit loud but we were enjoying ourselves.. 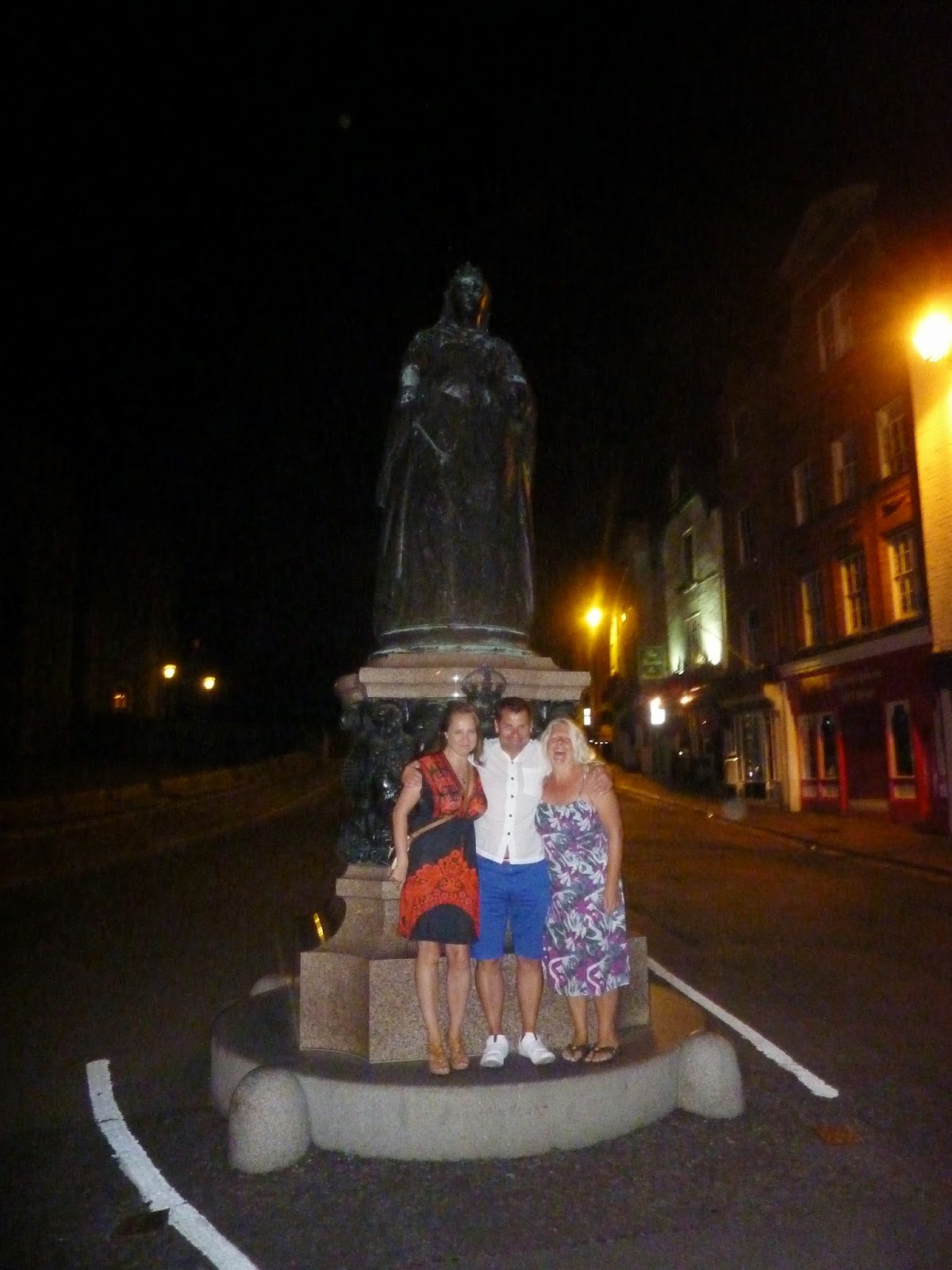 Sunday morning as you would guess, we got up late and Al was the one who was suffering the most. We surfaced around 9.00am and the kettle was on.. We had some tea and looked at the weather as it was a bit overcast. 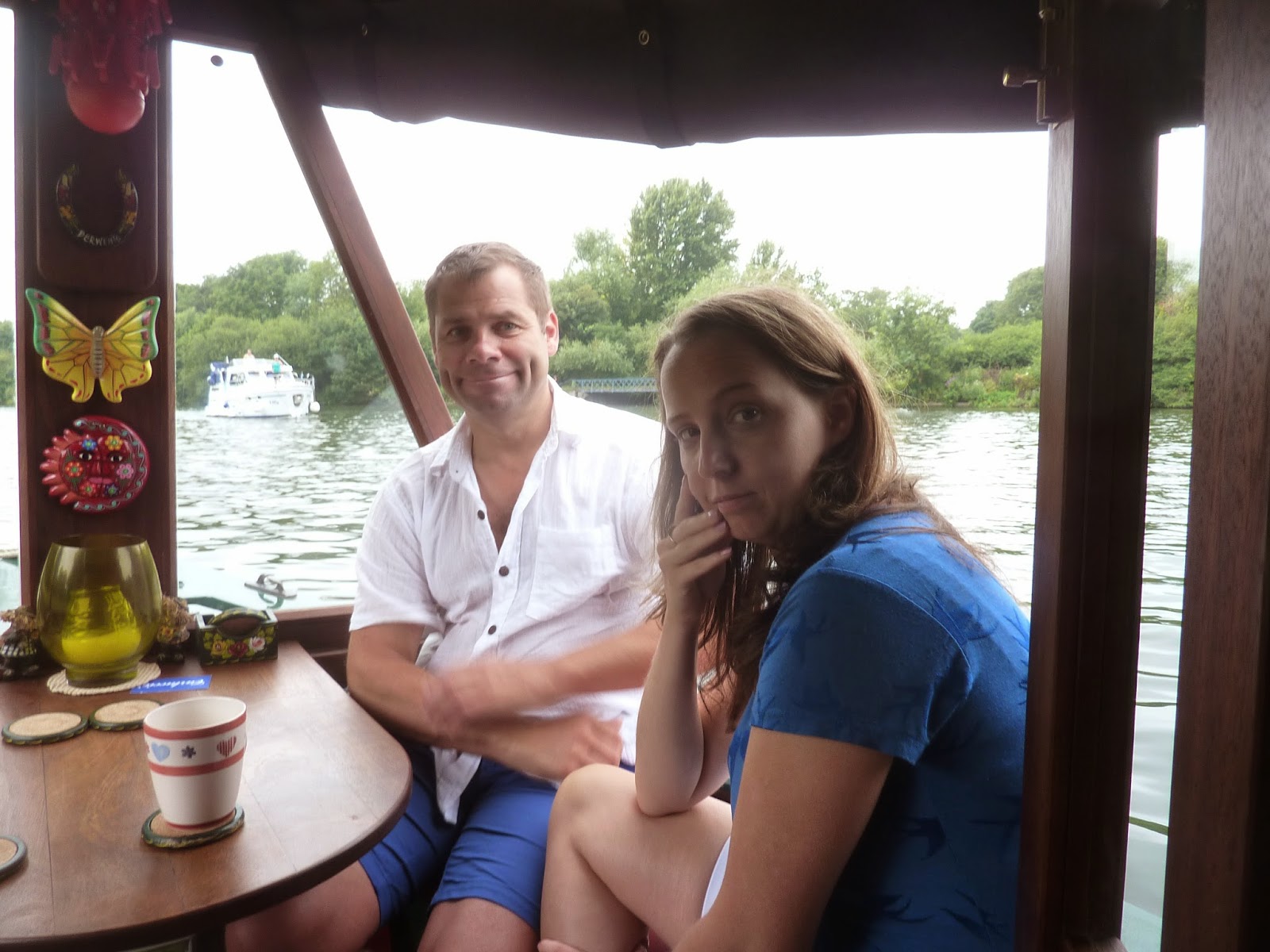 Al somehow made the bacon butties, but couldn't manage to eat one. So what shall we do.. As it got a bit late we decided to take them on a trip to Bray and back and as we set off the sun came out... Paul and Sam were soon into helping out through the locks and it was warming up as we travelled. 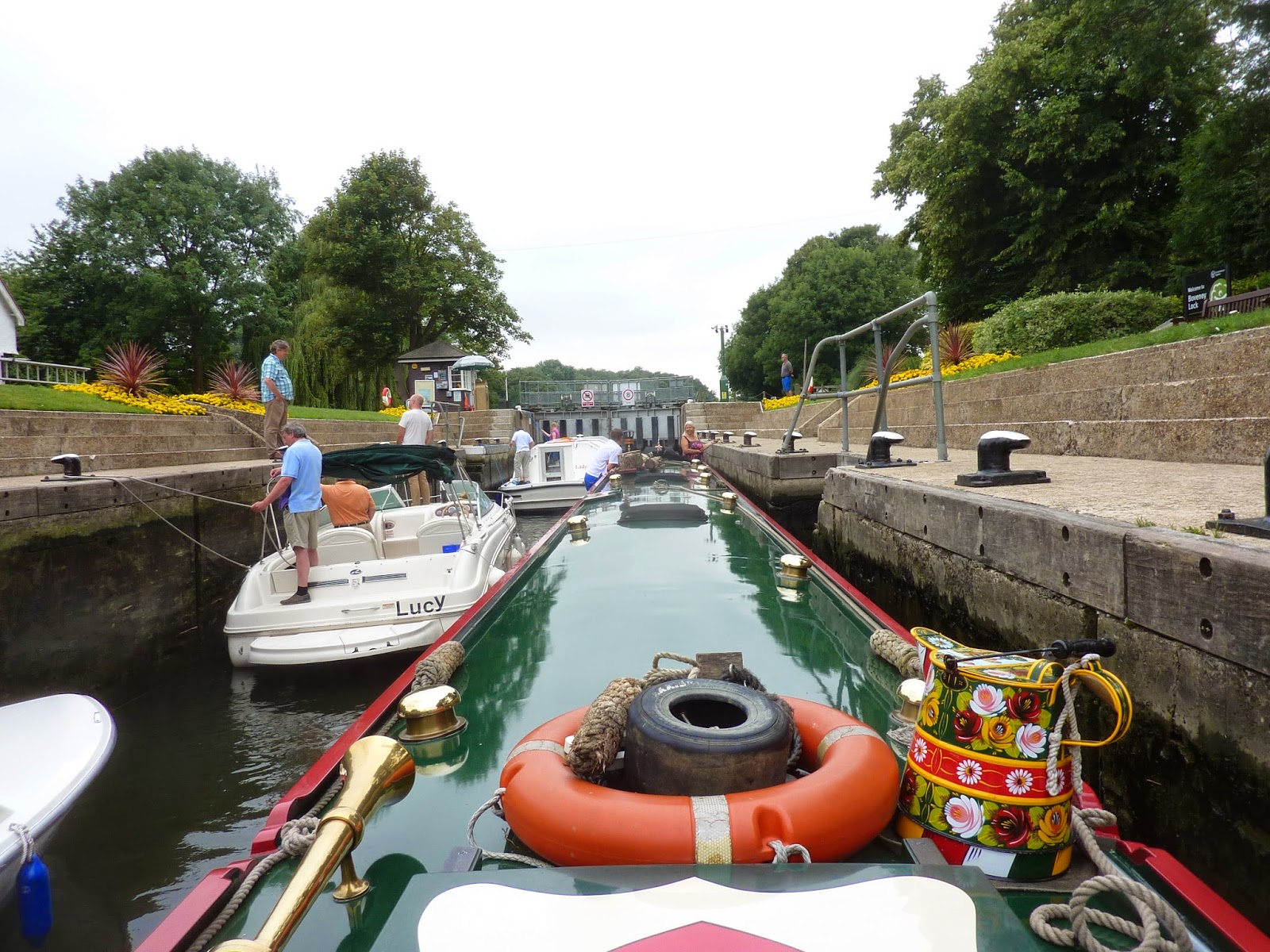 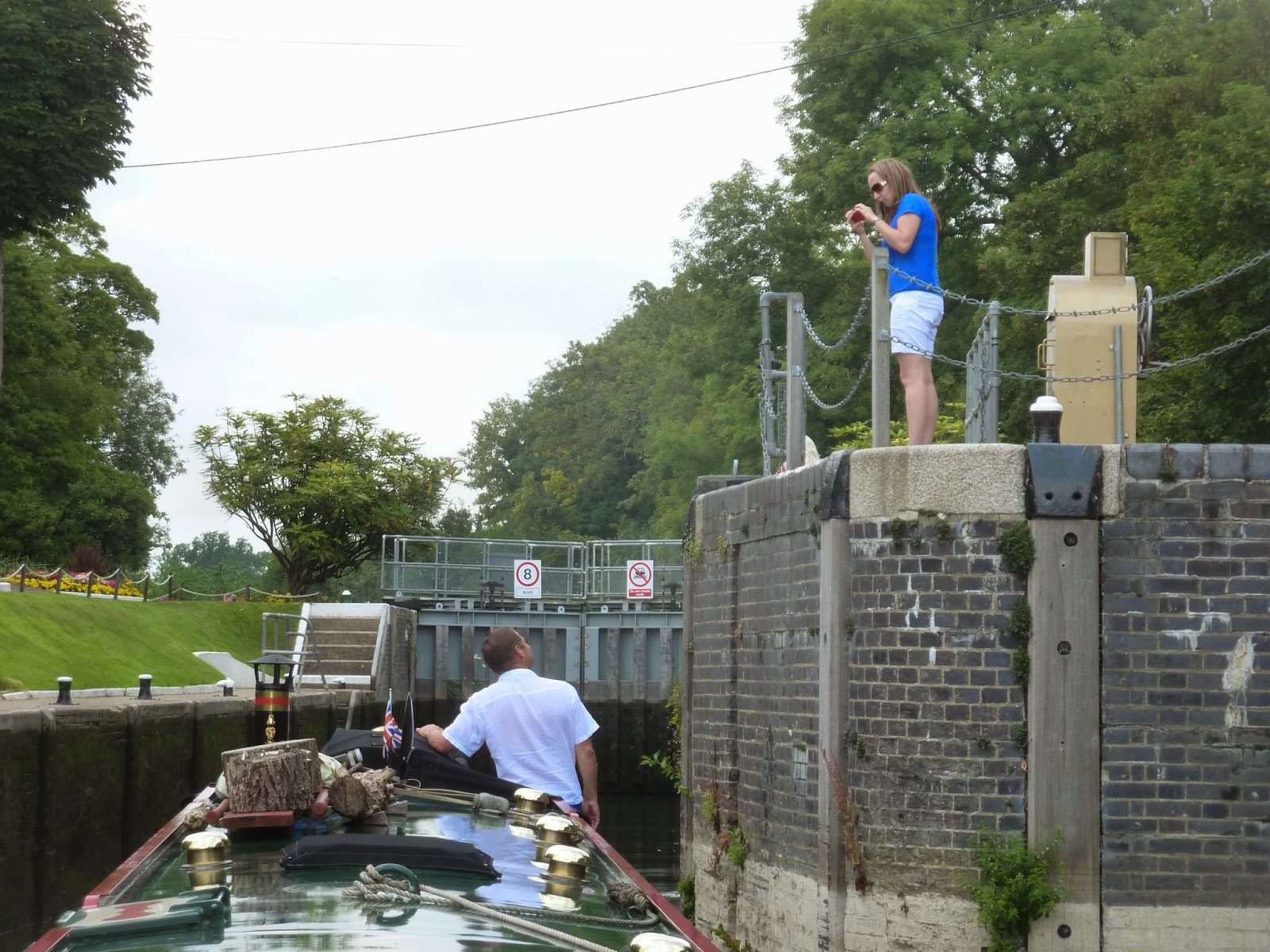 We got to Bray and they were fascinated by the houses we were passing.. 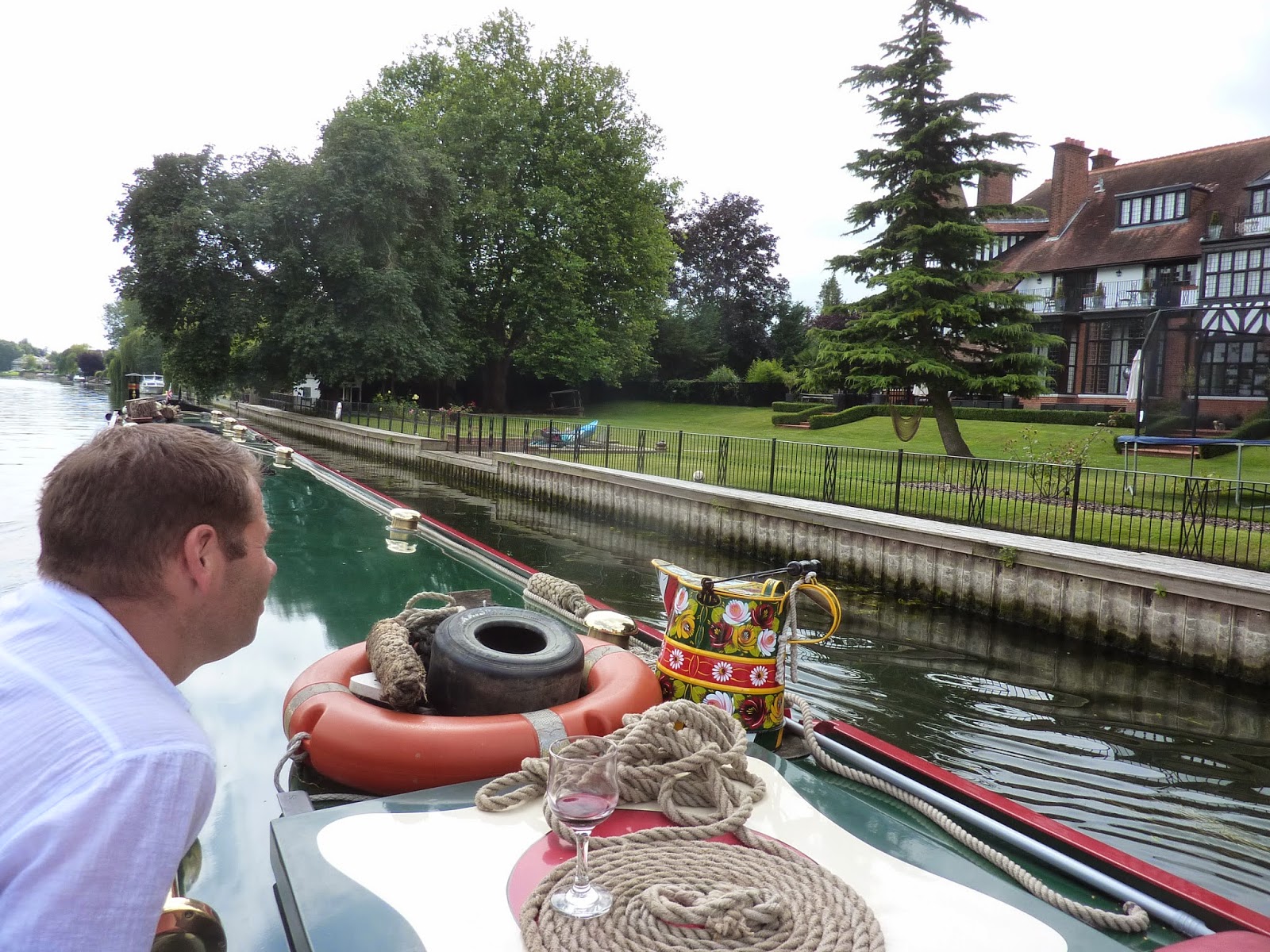 It soon turned to lunchtime and we pulled into our mooring at Bray.. We got out the chairs and Al (who had sobered up a bit) got lunch ready on the cratch table.. 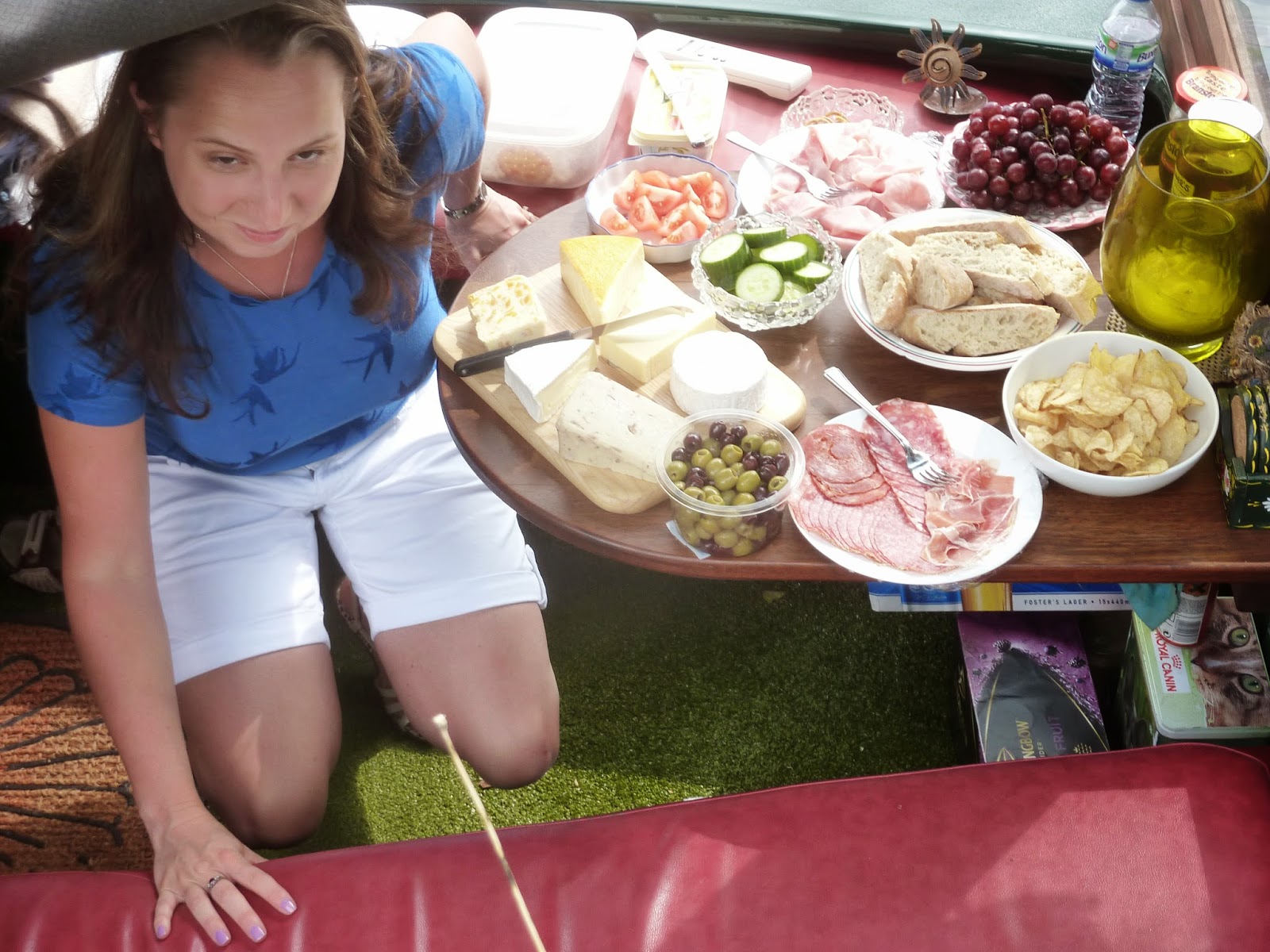 We turned the music up and the sun turned it's rays up and the drinks soon flowed again, hair of the dog!!!! we set off at five and this time Paul and Sam were taking us back.. 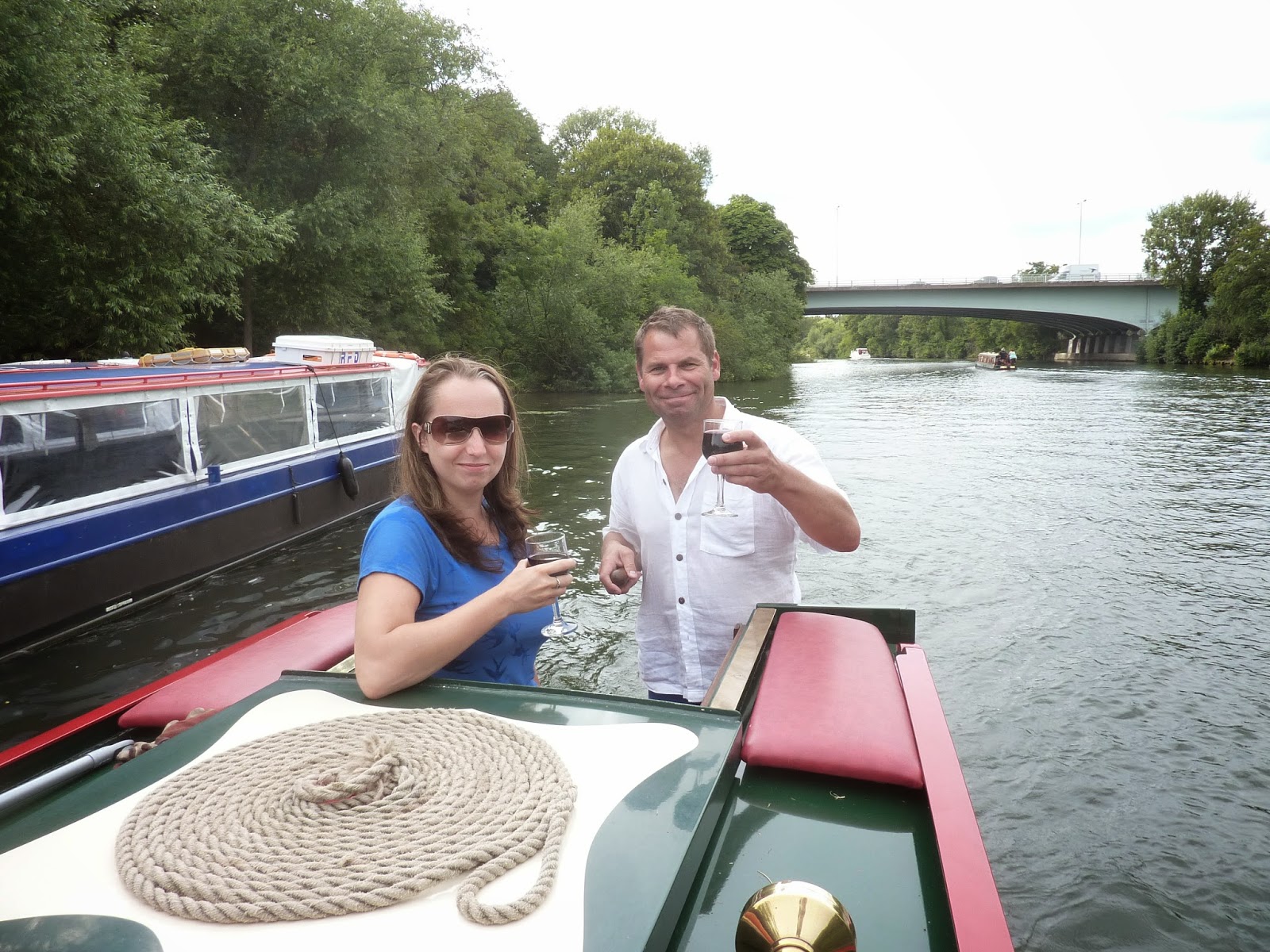 It was nice for Del and Al to be sitting out on the bow listening to the trickle of water with a beer, it felt like we had the river to ourselves again.. 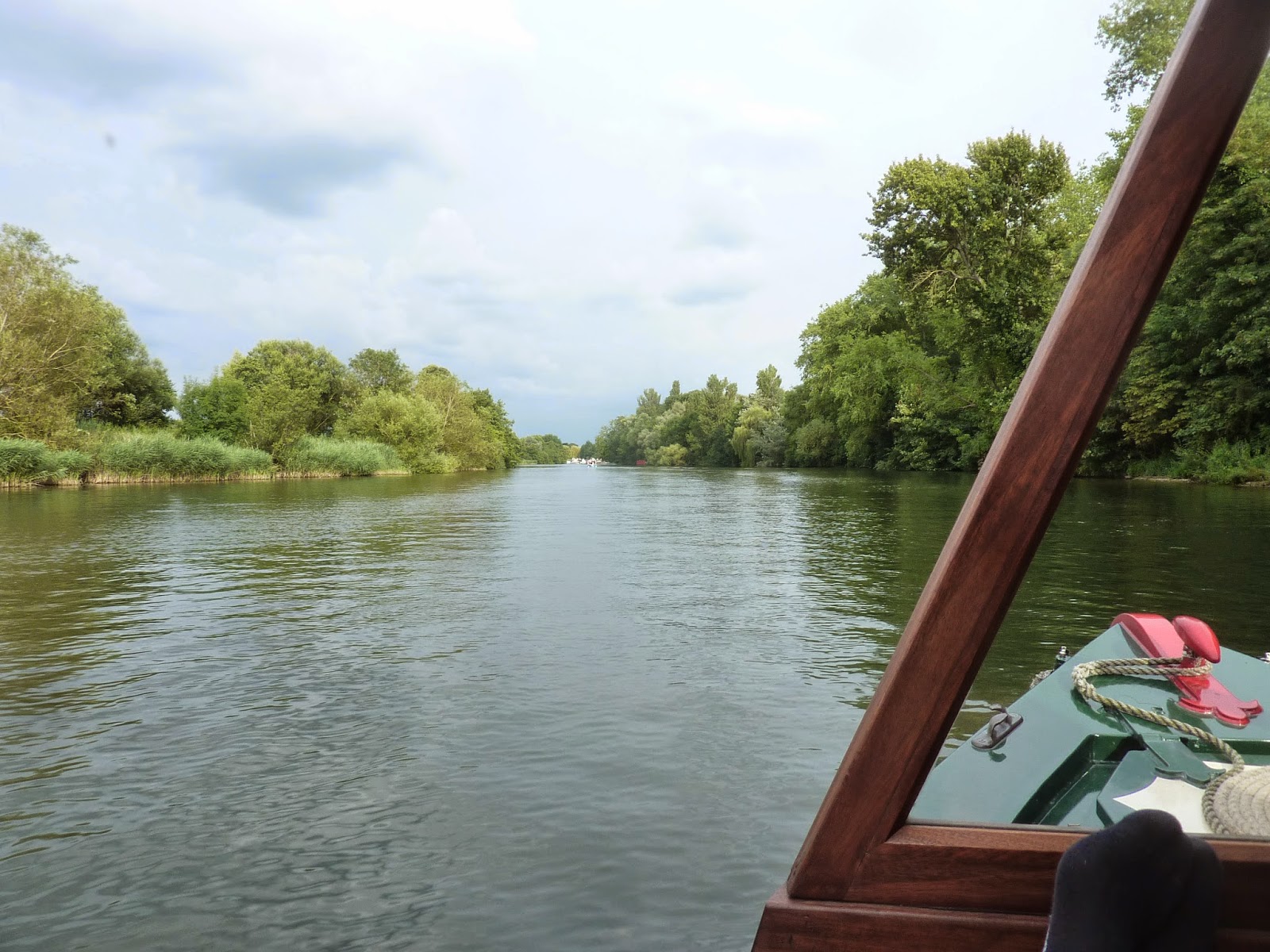 We pulled into Windsor again and we managed to get a nice mooring on the backwaters.. We had some nibbles and we walked to the station at 7 30pm.. We checked the times of the trains and just had time to pop into the pub and have the 'one before they go' drink..  They ended up rushing to get the train as we all didn't want to split.. 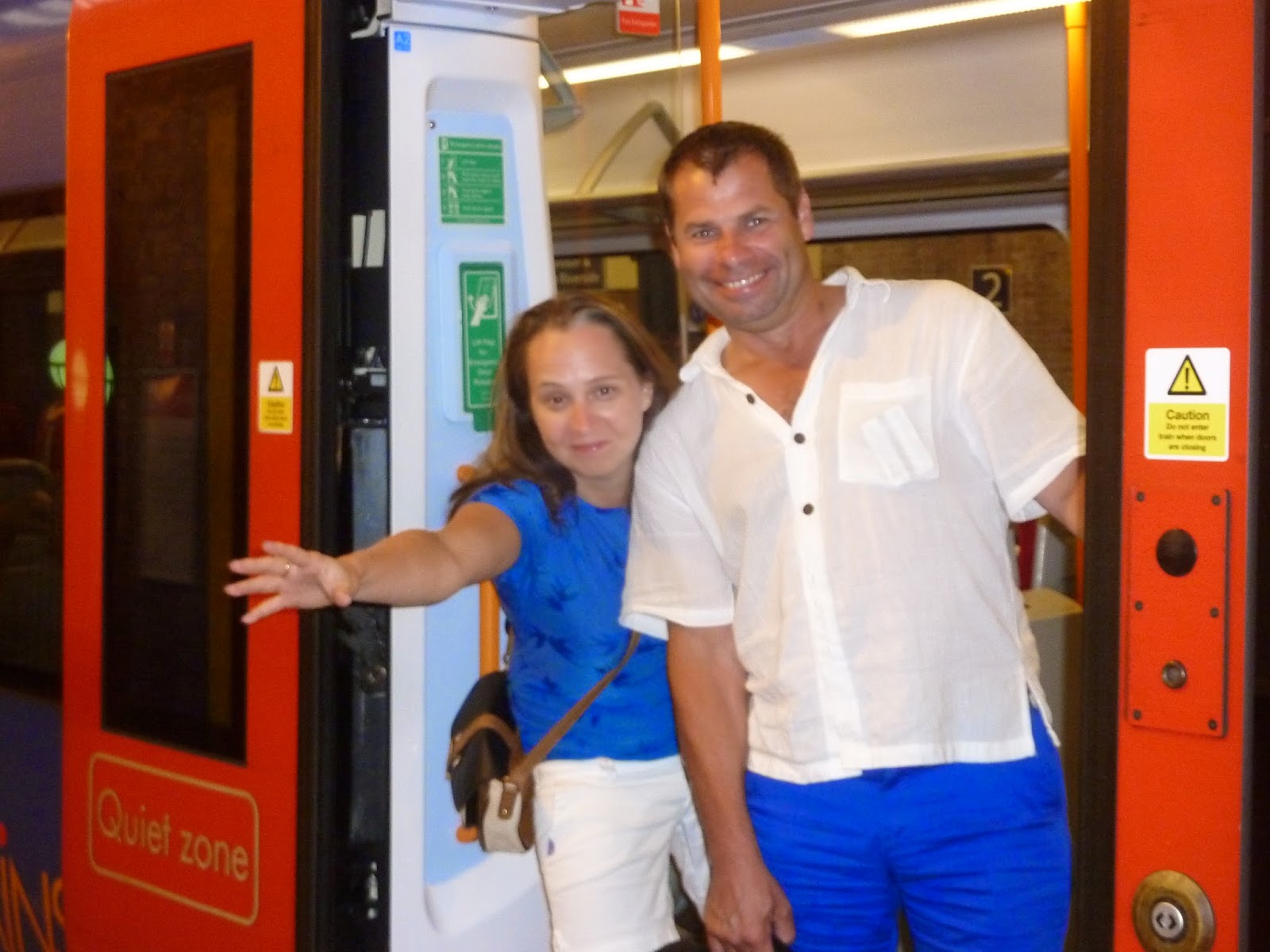 We walked back along the waterfront and picked up some chips and watched the sunset across the river.. then chilled in the warm evening back on Derwent6. Thanks again you happy pair.. It was just a great weekend and we had so much fun. We will be doing that again later in the year... 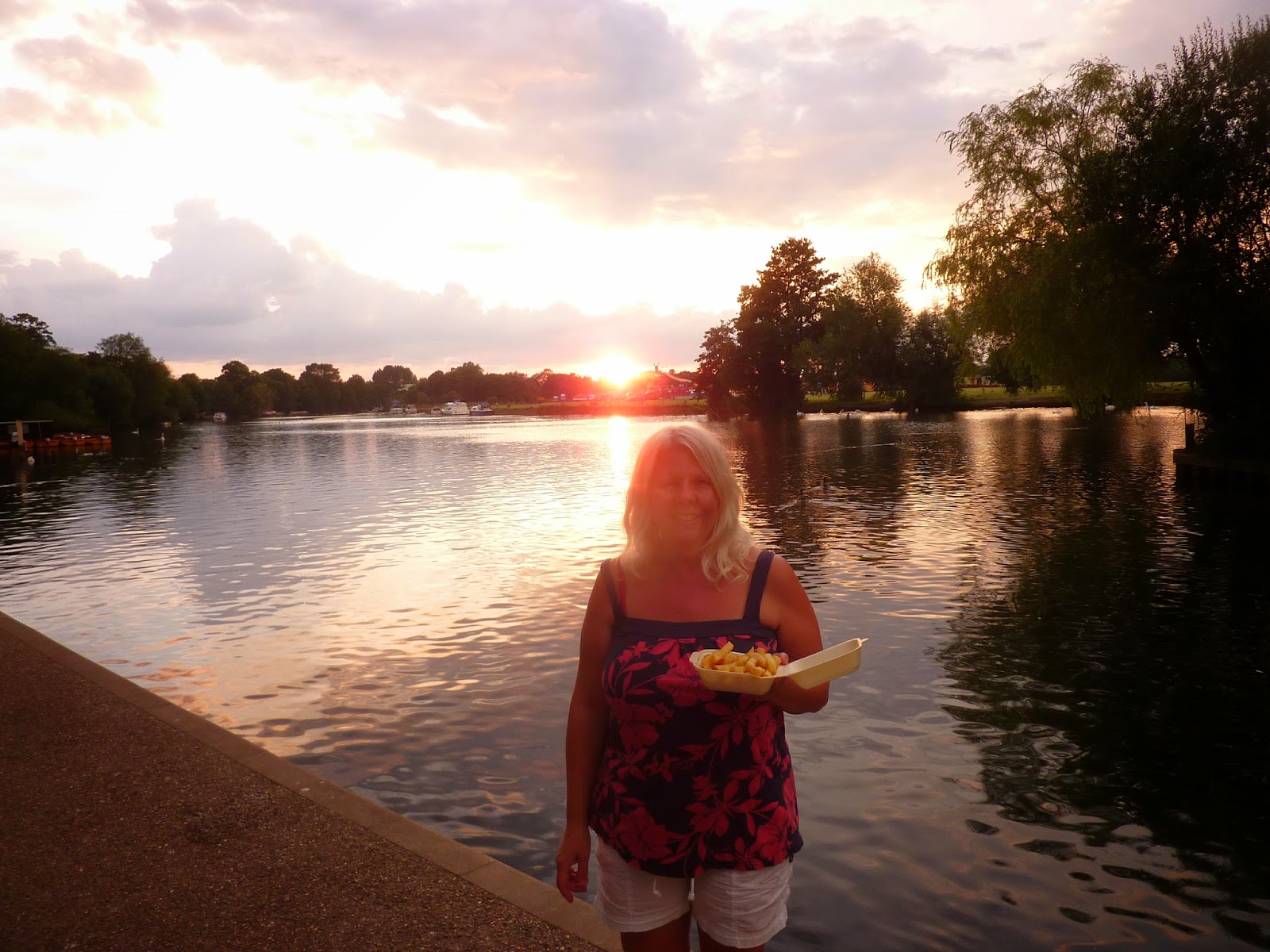 By means of introduction, we are Paul & Elaine Shuter,
we have been following your blog for several years whilst dreaming and planning (mostly dreaming) one of our own.
We have now taken the plunge and ordered a new boat and I hope that you will follow our progress on http://mel155a.blogspot.co.uk . We are novices so we welcome all feedback.

On a different subject, I (Paul) noticed from your old posts that you lived in Snodland, I used to drive by everyday for several years on my way to work at Fisher Controls in Strood, we lived in Newnham near Faversham. all this was in the mid-nineties but we were very recently in Whitstable and had a few pints in the Old Neptune..

Hi Both
Glad you had a good night with your friends. Don't know how you manage to stay awake to 3.00 am we are dead to the world at 10pm.
Nice to meet you and hope we didn't wake you when we left.
Bob and June

Hi Paul & Elaine, Good luck with your new boat, bet you're really excited! We will follow your progress, and look forward to meeting you out on the cut...It's a small world, we have good friends who live in Whitstable and their local is the Neptune on the beach and we've had many a good night in there!