In the reasonably priced car..Wow! what a Day. 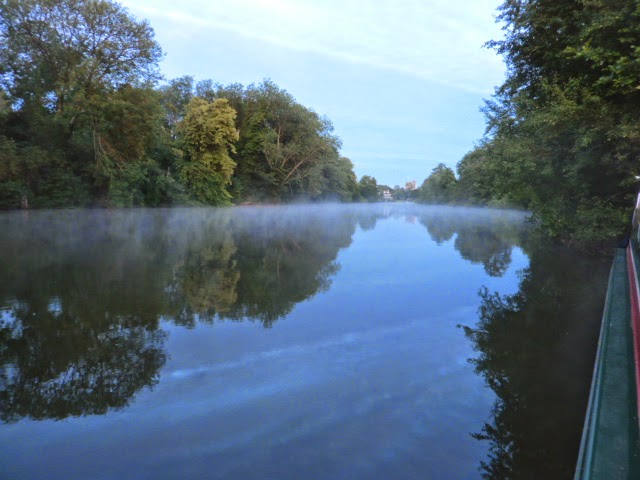 Its funny how things happen in life and there are some losers and some winners..  Well on Tuesday we got a phone call from Joy and Steve who we had just seen in Windsor, saying that a guy they knew, Martin, who worked for Honda had got some tickets sent to him for the Festival of Speed at Goodwood and it was too late to give them out to clients. He offered them to Joy and Steve as he knew it was easy for them to get time off to go, and Steve also knew we were available. Can we go? of course we can bloody go!!
It turned out to be the pre show which is called The Moving Motor Show where you get to see all the cars and anyone very interested in buying on gets to test drive them on the elusive Goodwood hillclimb track...  But! Honda had thrown in a go in one of their cars on the test track, if you brought your driving licence... Wow! Lets go racing!  Joy didn't want to go so Steve offered to pick us up at 7.30am in the morning, it was very exciting..
We got up late after not hearing the alarm but just managed to make it in time. Good job we didn't have far to walk.. We travelled down to Goodwood and the traffic wasn't that bad as we pulled into the carpark.. We could see the cars and dirt bikes in the distance sliding around in the fields as we walked to the gates.. 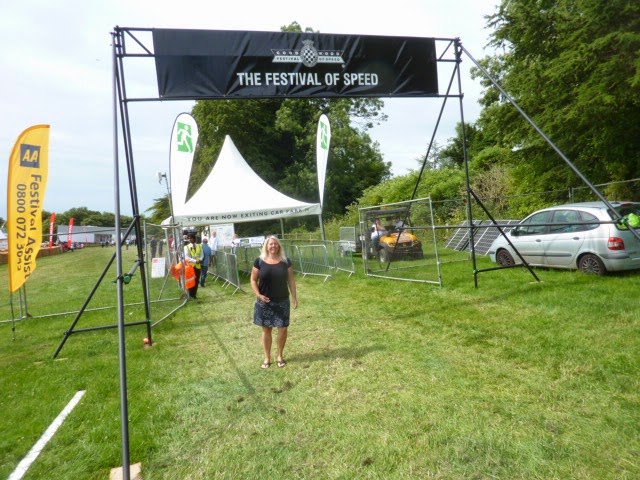 The first thing we noticed was how much there was to do.. 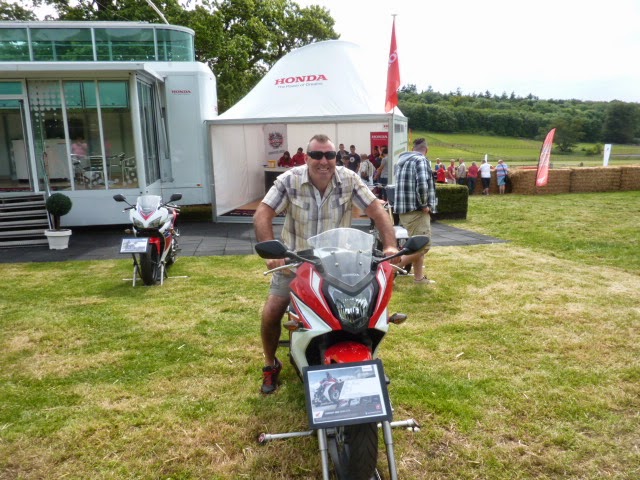 Lots of hidden corners and all types of cars and bikes, from the normal makes, retro, custom, to Supercars, to F1.. 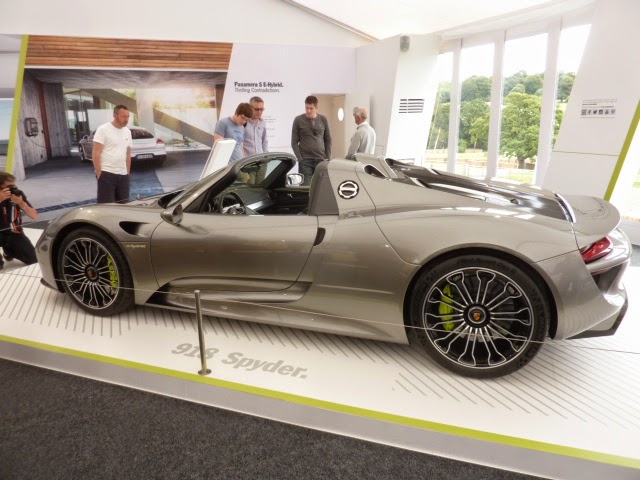 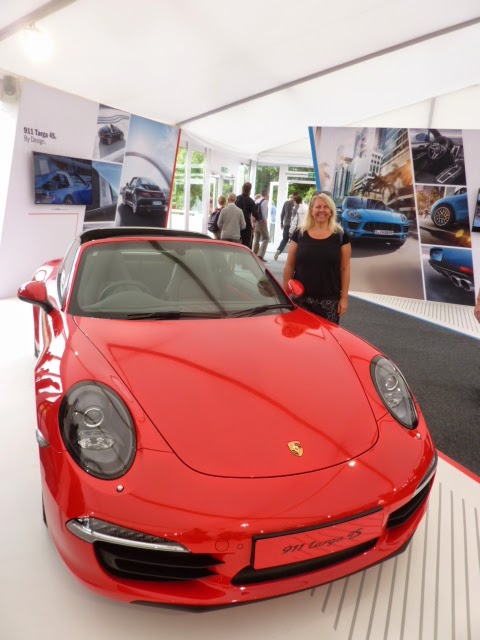 It was just a lovely day in the sunshine and we were able to get right up to all the new cars coming out, and get in them if we wanted to.. 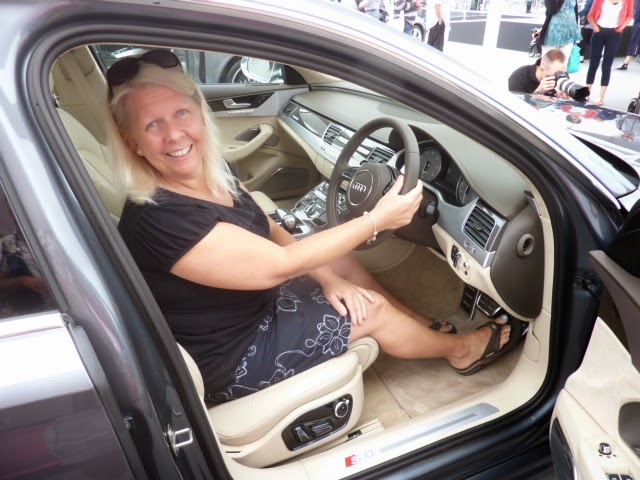 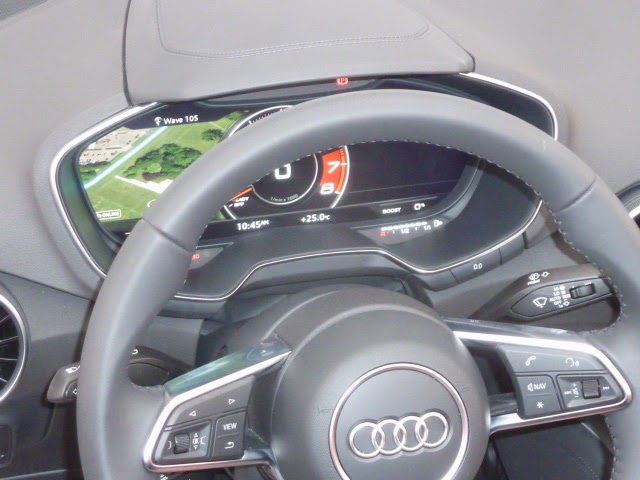 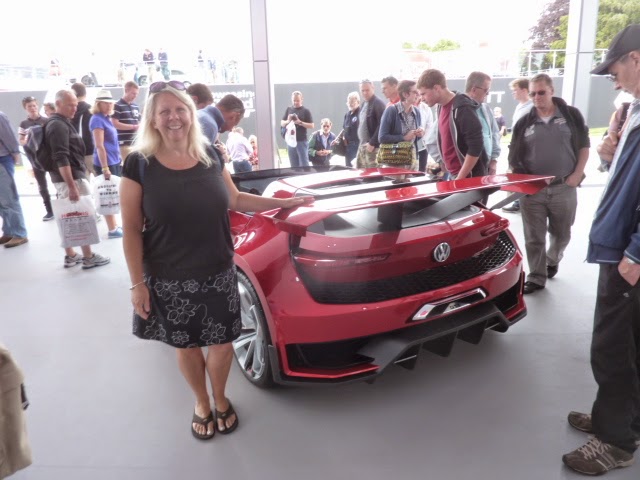 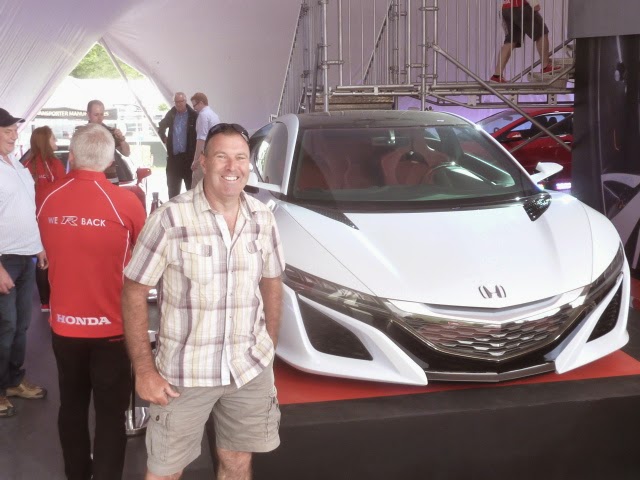 Al sat in the back of a Bentley like the queen and also sat alongside Hamilton's F1 Mercedes. 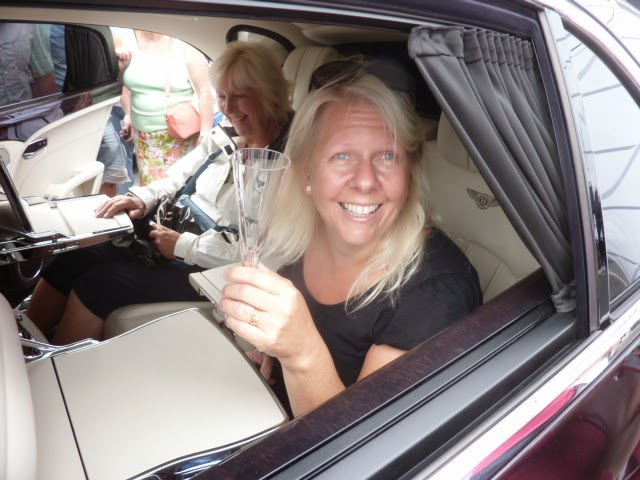 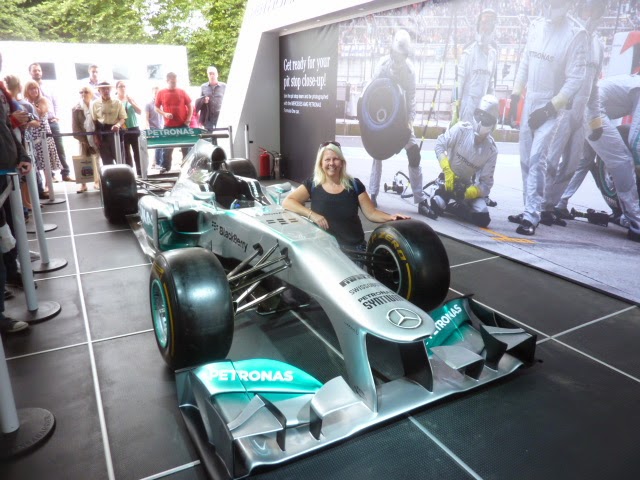 We took so many pictures we can only put a few on here.. 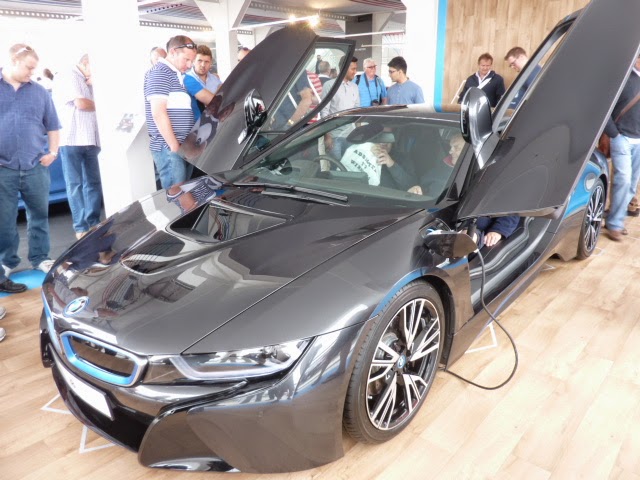 We stopped for lunch and sat on the grass and they then put on a bike show right in front of us... 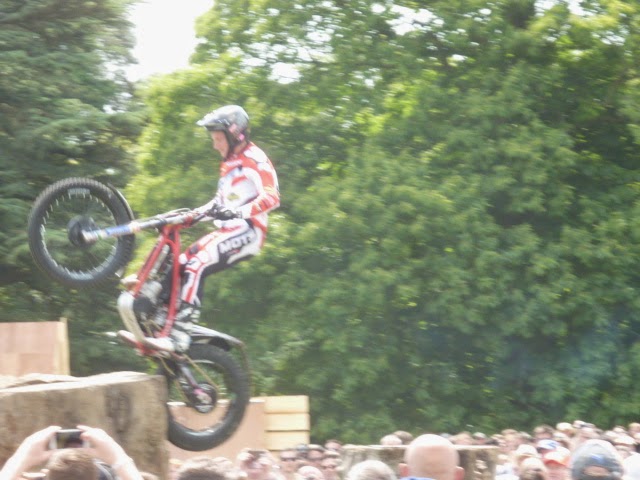 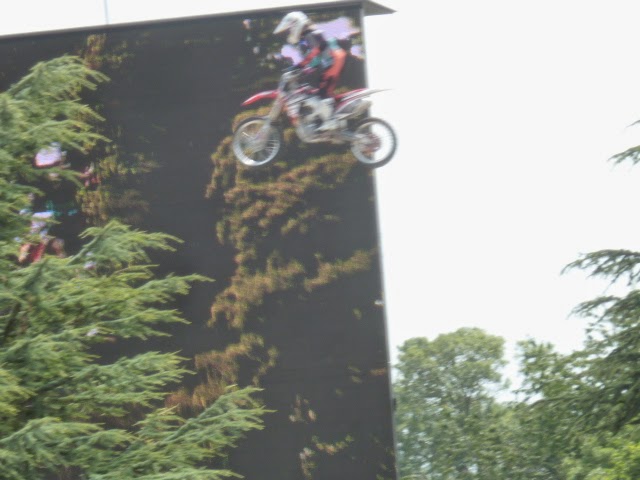 In the second half of the day we saw the Supercars and F1 paddock, all in the background of Goodwood House.. At 4.30pm we had a slot booked at the Honda stand on the hill climb pits.. 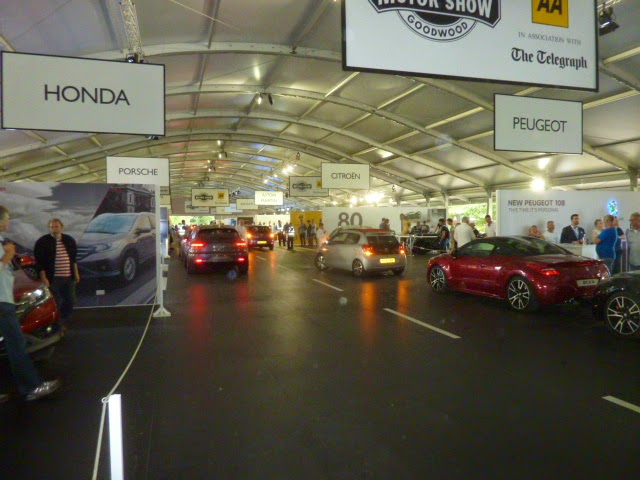 We checked in and waited for a driver..  We had a new Honda Civic which we were allowed to thrash up the track with speed and Al was allowed to sit in the back, so buckle up! 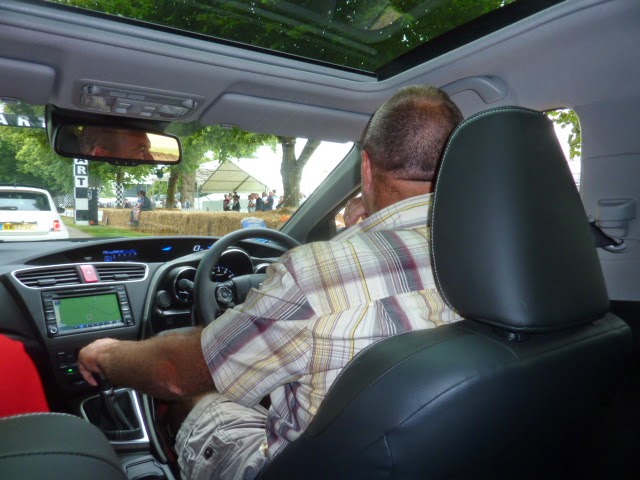 As the lights went out Del  put the peddle to metal and we hit the first bend sidewards, "Wow good" the guy said "keep your foot down, and don't lift at the next bend" Del wanted to but kept it down....WOOOO HOOOOO! we were racing! we crossed the finish line doing 75mph, that was good he said, Well Done! We loved it! Al's video was a bit of a blur....
It just started to rain as we picking up some bits and pieces Del wanted for Derwent6 and we walked back to the car.. What a great free day out.. 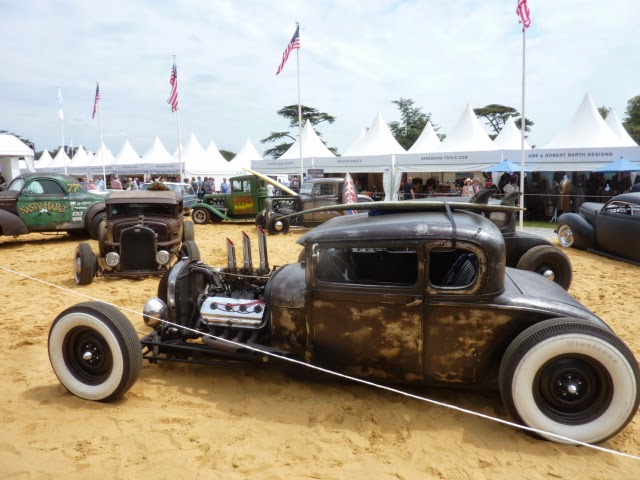 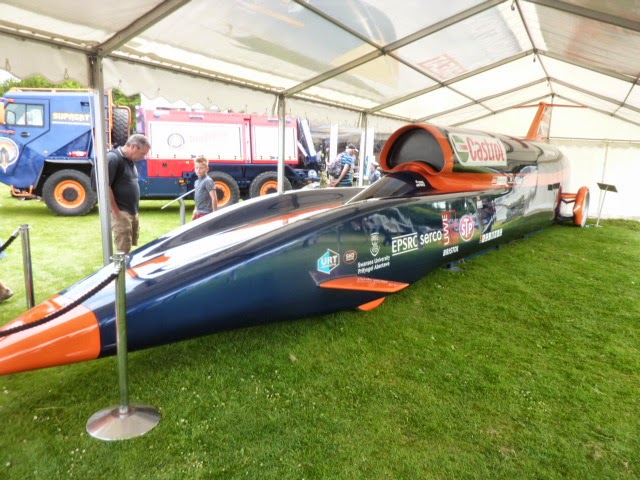 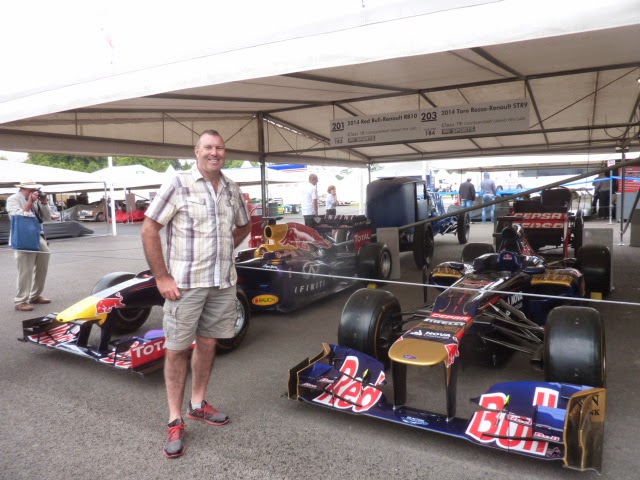 We would like to say a big thank you to Martin from Honda and to Steve and Joy who organised the tickets and for thinking of us.. We had just a great day!!
Steve got us home after diverting a few times to miss the traffic in the pouring rain. He dropped us off and we got back to Derwent6 at 9.00pm..  Phew! we were knackered!
Posted by Del and Al at 7:56 PM