With a load going on today we were up early. We run the engine at 8.00am as we wanted to charge the batteries in case we had any problems. Del then started on the calorifier, first draining it and then disconnecting the pipework. 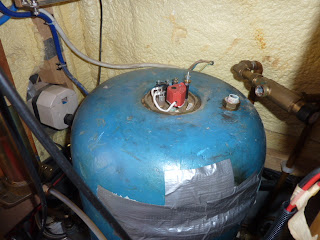 After removing a few doors we were able to lift it out. 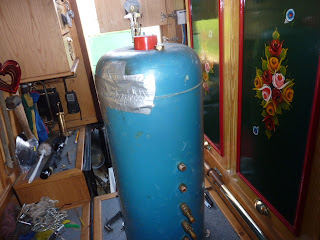 The first problem was that we had compression joints on the old tank and threaded connections on the new one. So it was a walk down to the chandlers to pick up some fittings. We also run out of PTFE tape. The new calorifier was then dropped into place after changing the immersion heater, and the jacket was then placed behind it and then we bolted it in. The next problem was that the old pipework didn't line up with the new calorifier so some pipe adjustments had to be made. The new pressure valve was then fitted and the pipework adjusted. We then filled it with water and had a small leak round the immersion heater seal ring. Hopefully a small tap round with a hammer and screwdriver has sorted it out. 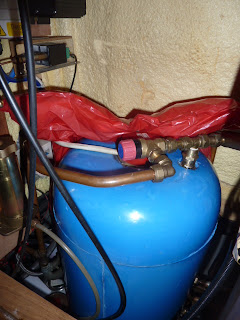 After filling the engine coolant back up with an antifreeze mix, we then run the engine. Hey Ho, we had hot water again. We had a couple of drips, but a tweak with a spanner and they seemed to stop. It was then on to the central heating. First we got the pressure back in the system and then bled the radiators and calorifier. As the water was hot we will test this in the morning. It was just getting dark as Del then put the cupboards back and put his tools away. The first thing we did was to have a nice shower. Del was rewarded with a lovely dinner followed by watching the football in the evening. Shame Arsenal lost, it could have been a perfect day.....
Posted by Del and Al at 10:49 PM

So glad all is well now and you can get on with enjoying the festive season with hot water ;0). Jo xx