We had a bit of a lay in this morning as surprisingly it was quite quiet here in Bristol City centre. It was raining very lightly when we surfaced and we felt we needed to light the fire, something we hadn't done for a long time. We had a nice morning on Derwent6 watching all the people in the city going about their business.

We then walked along the harbour wall looking at all the old boats and trains outside the new museum opening later this year. 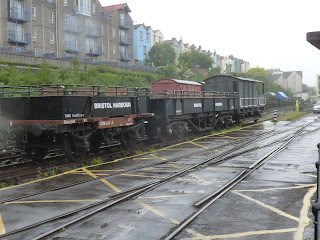 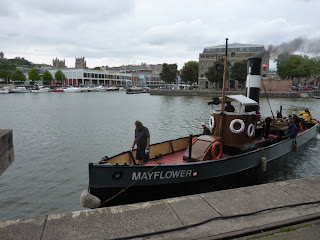 In this shot Derwent6 is moored in the background. 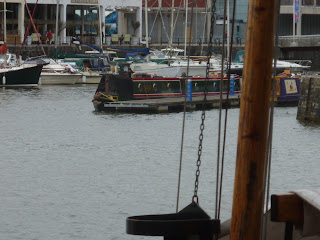 We then got to Brunel's SS Great Britain, and looked at the admission prices. 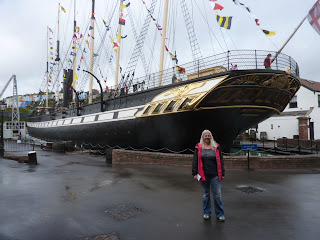 Under concessions it included unemployed, that's us we thought, it was five pounds cheaper and worth a try. We had no proof as we don't claim benefit and ended up speaking to the duty manager. We filled out a feedback form saying that the prices board should be changed saying what proof should be required, and we ended up paying the full price of £12.50 each. We started walking round the museum and the duty manager came back up to us saying we were right and for our trouble we could have complementary large coffees in the cafe, usually £1.90 each. 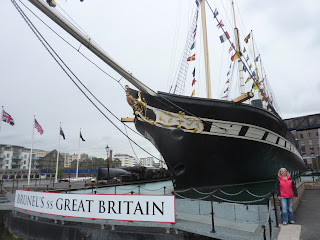 As for Brunel's masterpiece it was brilliant and well worth the money. 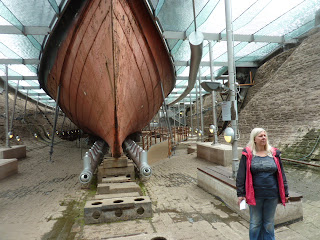 You can walk under, over and inside the great ship, and they had even got the smells right. 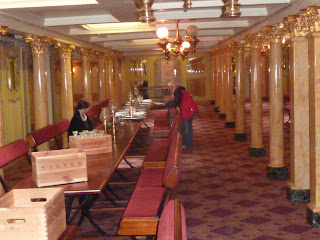 You can steer, set the sails or engage the propeller, a ship well ahead of its time. 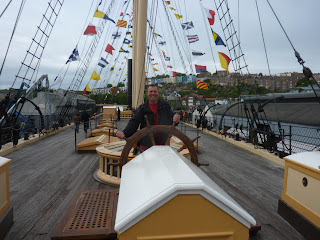 We still wouldn't want to spend two months on her, couped up in the rooms, on the way to Australia. 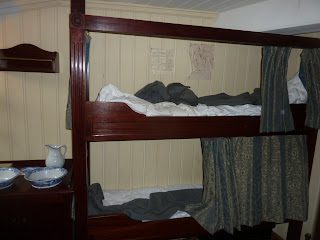 We came out at 4.00pm and walked into town via the old town and into the new modern Cabot Circus shopping centre where the sun came out. 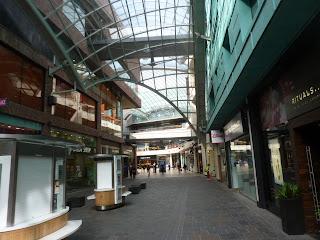 We had something to eat in Nando's before we walked back to Derwent6. We watched the sunset with a glass of wine on the bow of Derwent6, people watching across the harbour.
Posted by Del and Al at 9:05 AM

As always, a brilliantly descriptive post of everyday life on the cut, keep em coming :0)

Glad you enjoyed Bristol, I live nearby in Portishead and last year I met you whilst on a holiday hire boat in Middlewich and you suggested I read your blog to catch up with where you were up to on your travels, imagine my surprise to find you in Bristol. Keep on blogging and i@ll keep on reading!

Great to hear you have arrived in Bristol. We loved it there, its a fantastic city. Guess what, we have been travelling with Liz and Robert on NB Blue Point for nearly three weeks since the Wigan flight. Hoping that we can all go onto the Rochdale next. Its been great fun. Hope to see you again later in the year, all the best, Frances and Alan

We were in Bristol last week but in a campervan not on the boat.
Once she's finished and we retire we will do it by boat.
Have fun
Julie

Bristol sounds fantastic. Good on you both for trying to get concessions. I hope the coffee was worth being free hahaha.
On day we may get there. Jo xx

Thanks for reading the blog Eric, glad you're enjoying it....

Hello....remember meeting you last year in Middlewich! Bristol is great we're having a fab time!

Hi Frances & Alan
Bristol is great isn't it? we've had a fab time. Say hello to Liz & Robert from us.....they said they were heading North this year...small world on the cut!!Have fun and hope to see you later in the year x

Thanks Julie, hope you had a good time and good luck with your plans on the cut...

Hi Jo
You'd love it here, it's a fantastic place. Yep we thought we'd give the concession a go....not often we can take advantage of one!! and the coffee was fine......well it was free lol x