Sitting out the high levels

Blimey we were sitting in bed feeling very smug after moving yesterday. It was tipping it down and doing those locks today would have been a nightmare. It just never seemed to stop. It just went from heavy to light, as we watched the water levels come up. In fact it was strange as we had five widebeams come past us in the bad weather. maybe this was because it put more water in the canal for them to move and there is less chance of meeting another narrowboat.
We then had a swan attacking a young Canadian goose next to us, but it did get away in the end. 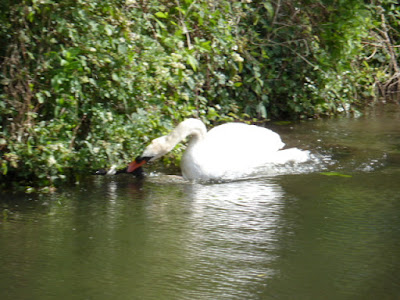 Our next trial on the batteries was the slow cooker. It's 120 watts, but is on for 7 hours, and with no solar, so this was a good test..
We watched the volts and percentage drop on the controller, as we had to use lights and other electrical items as we were moored in a very dark and dingy place on this horrid day.
When we went to bed it got as low as 42% and the voltage was still holding at 26 volts.

In the morning it had dropped to 36% and 25.8 volts with the fridge going overnight, the lowest we have let it drop. So the lesson was don't use the slow cooker when we are not cruising or its not a nice day for solar.. This is called boat management and you have to learn what you can and can't do in certain conditions.. 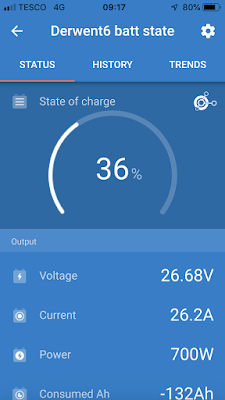 So it was back to running the engine, which seemed weird as we hadn't have to run it while static for quite a while. We thought it would charge quickly, but this wasn't the case. The solar panels still weren't producing much and the 60amp alternator has been restricted by the Buck Boost to feed the lithium batteries 25amps as they can't take 60 amps, so it took three hours to get them back to 80%.
The batteries perform better between 60% to 80% and even with the little solar coming in the batteries were showing infinite and even slowly charging again. 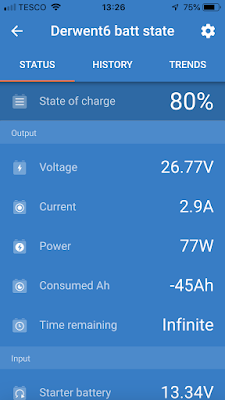 The following day the weather still wasn't good and we fancied a walk into town, but didn't fancy getting wet!. So we had no choice but to sit tight again. Al was going down to Kent on the Friday and the train was easy from Theale, so we moved Derwent6 on to some 14 day moorings so we could stay another couple of days..
Al saw friends Bernie and Sarah as on the Saturday Al & Sarah went to see the show 'The Ballroom Boys' at Bromley.... they had a fantastic time..

Del stayed with Derwent6 and did a few jobs that needed to be done. First he checked the Crankshaft nut for movement again and from the picture you could see things hadn't moved which was a relief. 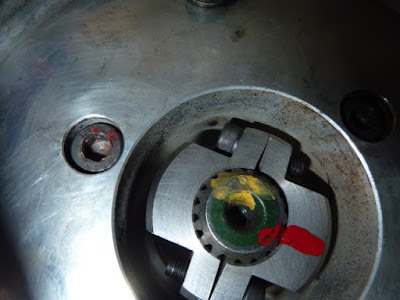 Its next check will now be at 600 hours (fingers crossed)  unless any unusual noises are heard. He also fitted the new timer boost switch to the immersion heater so we could have the hot water on for fifteen minutes. 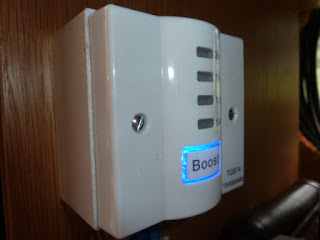 The great thing was we could do this from the lithium batteries and solar so free hot water!
Al got back on Sunday and we caught up on things over a beer and made our plans to move tomorrow as the weather looked ok.
Posted by Del and Al at 3:47 PM

Hi Del and Al, I've been reading with interest about your lithium batteries as we've just been installing them on our new boat. Lithiums can take virtually any charge you can give them, but the alternator has to be restricted to around half its capacity otherwise it could overheat and burn out. We have two 175amp alternators and both are restricted to 80amp each so charging our lithiums at 160amp. Maybe you could run a charger off your travel power to give you a quicker charge time? 25amps seems really really low to me. The main reason we went down the lithium route was the quick charge time, we should be able to put back our daily use in half an hour. Hope the weather cheers up and puts the solar back into use, enjoy the K&A :)

Hi Debbie,
Thanks for reading the blog. We were hoping someone would be as excited about having Lithium batteries as much as we are..
Have you got a Boat Management System (BMS) fitted to your boat as Lithium's don't like the cold or the heat. We have only a 60amp domestic alternator and that has been reduced to 25 amps by a Buck Boost so the batteries don't get too hot when charging. Because we continually cruise, we could be putting that 25 amps into the batteries for four, or even six hours a day. They still charge quickly when cruising as they are also backed up with solar. When the batteries are fully charged at 100% (which is 4.2 volts a cell) the management system turns off the charge to the batteries to stop them overheating which would shorten the life cycles of the lithium battery.. That 25 amps then has to go somewhere otherwise it will burn out the alternator as it generates a back feed. So we have two lead acid dump batteries which can just keep taking a charge without getting too hot, which the BMS controls if Al uses anything as we go along. (Slow cooker, Washing machine, Hoover, etc) The BMS then tops back up the lithium batteries till they are full again..
We have had a problem when cruising where the BMS has switched the alternator charge to the dump batteries, but the solar stays on float and still trickle charges the lithium's, and they get too warm. Turning off the solar panels when cruising has stopped this, as we can watch it on our phones, so a voltage adjustment when the solar is on float, on the MPPT controller, needs to be looked at..
We only let the batteries drop that low because we were trying things to see what the lithium's can cope with, the problem isn't charging them, its overcharging and overheating them, but they have been fantastic.
Our set up was on another post. Good luck with your build, it must be very exciting times for you. Del & Al

Hi, yes we do have a battery management system fitted, as our understanding of lithiums is different to yours we have our BMS set to different parameters. It's great being able to see everything on the phone :) We're usually constantly on the move too so staying in the same place whilst we're doing the fit out seems strange, although luckily we haven't had the time to miss cruising. We did the K&A in 2017 so reading you blog is already bringing back memories of our time there. Hope you enjoy it.