As last night was a late night, and the sun was making Derwent6 creak and groan as it expanded, we quickly made the decision not to move today. The problem we also had was that Tooty was also out of routine and hadn't come back when we planned to leave. At breakfast he still hadn't come back, which is really unusual, and we could hear a small meow on the other side of the river.. it soon become apparent that he was stuck over there.
How he got there, god knows, but we had to send out the recovery team. It turned out it was on an Island and the stinging nettles were four foot high. After a trek through the undergrowth we located this mewing and then this sad little head poked out with a look of "Pick me up and take me home" 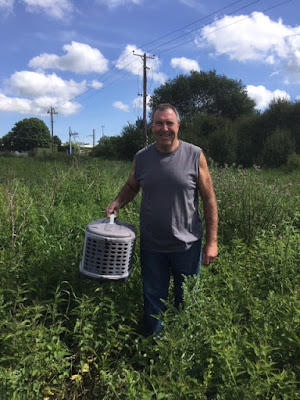 It was into his catbox and a march back to Derwent6, where he was all licky licky and purr, purr!
Now aching and stung from nettles we chilled for the rest of the morning. A boat did try to turn in front of us and got stuck, but a boat passing by managed to nudge him back straight and send him on his way. It felt rude to take pictures..
Late in the afternoon we went back up the pub for a nice cold beer and then got some Fish and Chips to walk home with.. Nice!
Posted by Del and Al at 12:42 PM

You're so right! Still not sure how he got there, possibly fell in and swam to the opposite side! At least he got back as close to the boat as he could lol! x