We woke up to a misty morning and had to get up due to the fact we had a Tesco's delivery coming..
Del did the brasses while waiting for the van to arrive.. We watched him go over the canal, then over the canal the other way, then thought we had better walk down and see where they had got to. Del was shocked to find the van parked up on the A5 and the guy walking over the bridge with one of those green baskets full of our food. "Follow this track" we told the guy and he put his basket back in the van and soon found us.. 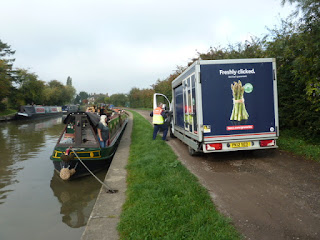 After we were loaded with food we thought it best to now fill with water. While doing this a boat pulled past us and started to get the lock ready just as we were fully loaded with water.
We pulled into the lock with them and started chatting.. We had both been Auto Electricians in a dealership, we had both moved up through the ranks the same in our work and we had both retired early.. It made the locks very easy as we had so much to talk about, other than boating.. 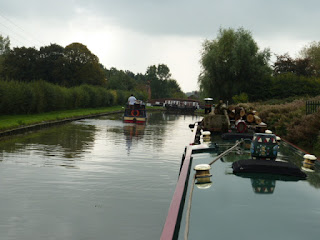 At the bottom lock we said our goodbyes and we pulled over for diesel and to go to the chandlers.. 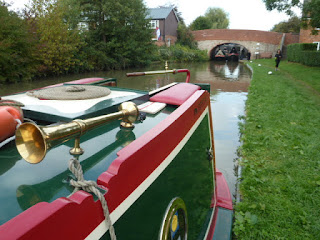 We got a bolt and some cratch bungee, and then fully loaded with Diesel we set off again. 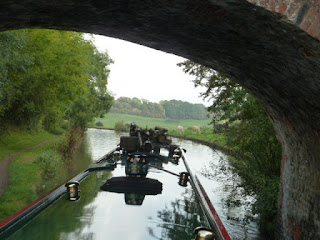 The weather was just fantastic for cruising, warm, still winds, not as busy, and the scenery was a picture with the trees changing colour. 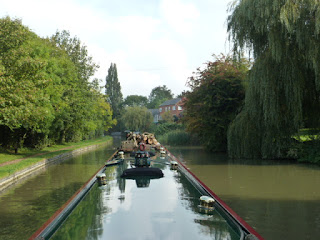 We moved through Weedon and down towards Bugsbrooke before we found a nice mooring which we had used before at Furnace Wharf. 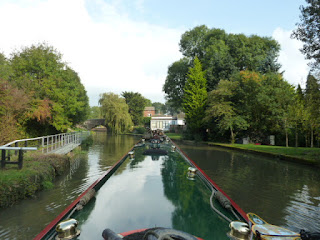 Tooty was straight off Derwent6 when we tied up and was already hunting. 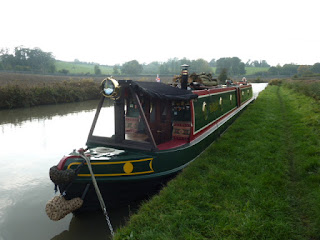 In the evening we sat and watched telly with a nice steak and salad Al had got from our Tesco's delivery earlier in the day.. So here we are Fully Loaded with everything we need, and happy!
Posted by Del and Al at 4:03 PM

We call this mooring badgers drift

Thanks Andy, never heard it called this, but no doubt we'll be calling it that from now on! Its a great mooring......as long as you don't mind trains lol !