Running at last, to a 30th Birthday

So again it was up early and everything in the engine room ended up on the bed with a old sheet over it..
Del set about trying to split these pulleys and first tried a sander around the end where it was stuck coming off. After a bit of grease it still wouldn't budge, so a bit of brute force was then in action. Terry had a good grinder we could borrow and we ended up taking a lump of the old pulley. Hurray! it fell off... 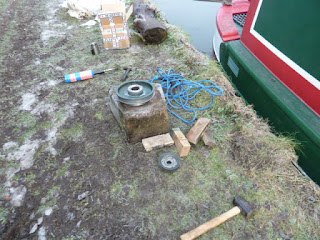 We bolted it together and then after another check of the clamp we fitted the old and new pulley on the end.. 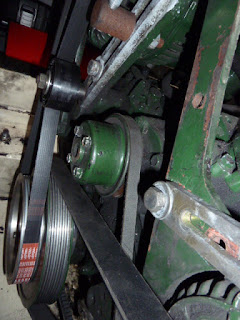 It was then a case of fitting the belts and my god they were tight to get over the pulleys, but were fine when they were on..

We were soon ready for ignition and kept our fingers crossed. The Beta 50 turned over slowly, as the battery had become a bit low, but then burst into action and purred like a kitten. 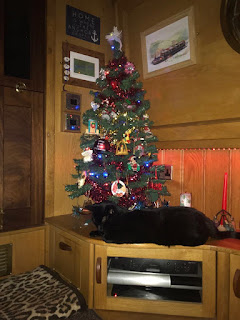 It was a lovely sound and feeling to see the batteries getting charged and the water getting hot, it was time to spoil ourselves with a lovely long shower, with one ear on the rotation of the engine in the background..
It passed the first hour with flying colours and so we quickly got ready for the next stage of the day.
After checking and turning off the engine, we locked up Derwent6 and then we jumped in the car we had hired and headed down the M1.
We drove to Kent and popped in at Bernie and Sarah's and picked up our post with all our Christmas cards. We then went into Maidstone and to our nephew Dale's 30th Birthday. It was lovely to get together with some old friends and family just before Christmas. During his birthday speech Dale proposed to his girlfriend Fiona, a lovely surprise!..
It was a lovely evening and we said our goodbyes at midnight and then headed back to the M1. Staying over wasn't an option as we needed to double check the engine. We arrived back to Derwent6 at 2.30am and crashed into bed.. A really exhausting day!
Posted by Del and Al at 11:55 PM