We had to get up early as we had a 7.30am to 10.30am delivery to pick up.. We got a text saying our parcel would arrive at around 10.00am and sure enough it did.. It was the package from Beta with our modified kit in it and we took it back to Derwent6 and inspected it.. 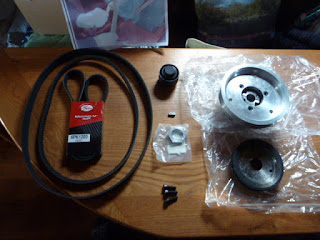 You will notice there are only two pulleys, when we need three, so one will have to be bolted to this lot..
We then had to go out and get a 46mm deep socket and found one in a commercial tool shop in Rugby.
So the first thing to do is fit the engine alternator pulley and insert the large 46mm nut. We had to clean up the keyway hole in the crankshaft and then with a slight tap it slides on nice and tight. We then had to tighten the nut and what the instructions don't tell you is how to hold the pulley. We were given advice to remove the starter motor and then told there is a small inspection hatch on the right hand side standing behind the engine. 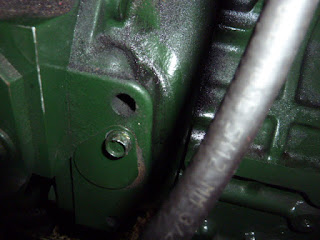 The torque for this nut in 110 lb/ square foot and this is very tight. 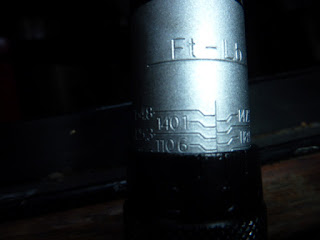 You need to wedge a screwdriver in the teeth of the flywheel and then turn the torque wrench till it clicks. 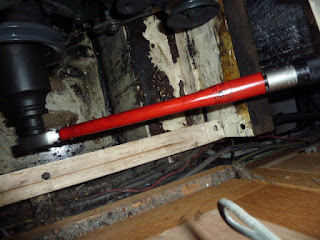 When this is done you then bolt on the clamp, bolting it to the pulley first and then tightening the small Allen bolts in sequence.. 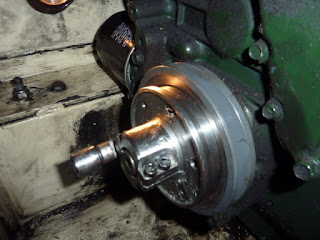 You then need to fit the belt as its easier to adjust and then split the front pulley.. This is harder than it looks and it wouldn't split fully, so it will be getting some heat on it tomorrow in the hope it separates. 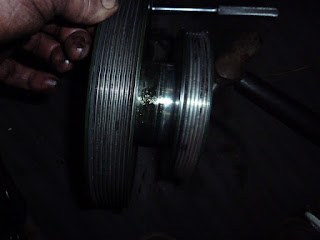 We had some help from Terry again with the use of his generator, so we later went out and filled up his fuel can we had used up, thanks again mate..
Tonight we will be going to bed early as we had a early start today, but hope to make more progress tomorrow..
﻿
﻿
Posted by Del and Al at 11:40 PM