We woke up today with a beautiful red sky along the canal.. 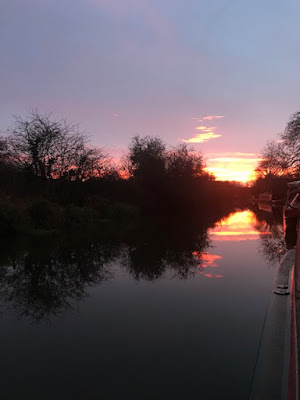 So the jobs today were to try and sort out the new water pump we fitted a few months ago. It was ok but the pressure had dropped in it and even the accumulator couldn't cope with its low pressure.. The shower used to go on and off as you showered so it needed to be sorted..
We first thought it might be the filter, which is fitted before the pump, but this was fine. On removing the pump again Del stripped down the pressure switch on it and noticed the settings were different to the old one, so he changed them over. Hey Presto it worked fine and now is the best it has been with the accumulator pressure a 25 psi.
The next job was the ammeter, which for some reason had stopped working, and Del found a wire lose on the shunt on the fuse board..
Al had spent the day writing all the Christmas Cards and cooking a lovely dinner for us both and Strictly was on the cards for tonight.
Del's arm is slowing improving so he might even be able to do some brasses tomorrow. The engine is behaving itself for now, but is still high on the list of jobs..
Posted by Del and Al at 4:49 PM