It is just so quiet here! We laid in bed and thought we would have one of those lazy days today.. It was a lovely sunny day, all be it very cold, but we never had a frost...
We opened the doors to let our new member of the family out to the world and he just sat on the gunwale and watched the world go by (till a dog walked past lol) 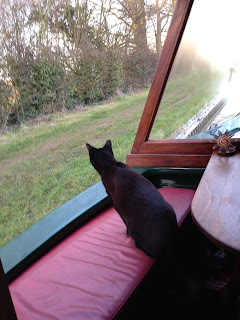 He was a bit of a scaredy cat and run to the engine room on Derwent6 shaking till he built up enough courage to have another go.. Last night we did have the hands of our clock chewed in the galley (the white bits on the hands are chew marks) and a few things knocked over, it's like having a dog really.. 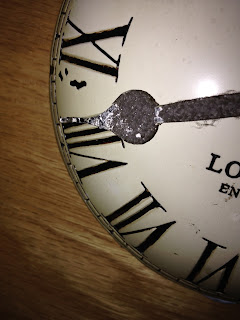 Del oiled the cratch board and cleaned out the bilge, while Al tided the inside which made us a bit thirsty, so we decided to go for a walk. 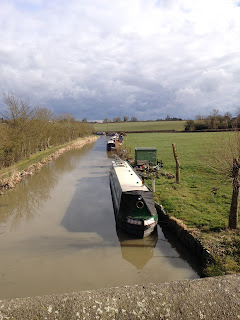 There is a lot of history around this place with Richard III settled up the road fighting battles. 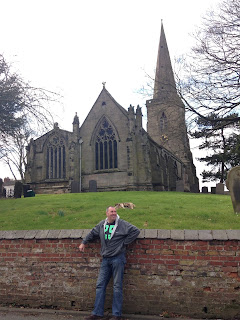 We found a nice pub out of the three pubs in Stoke Golding called The George and Dragon and we had a couple of pints before we continued our walk back to Derwent6.. 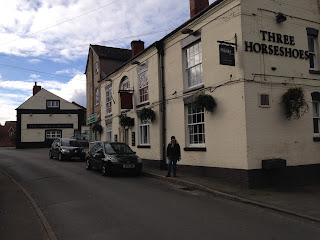 Al then cooked a lovely Sunday Chicken Roast Dinner that went down so well after our beers at the pub.. 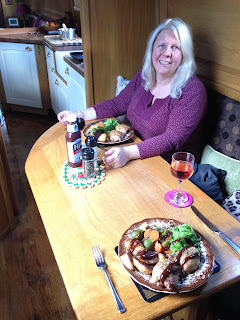 Del watched the football late in the afternoon, and at Dusk, Tooty was getting a bit braver as he was difficult to see..
He ventured off along the towpath and then Al was the one who got scared, worried he might leap into the cut chasing a duck, not realising it was water.. The last thing we wanted was to be groping around in the dark with a fishing net getting a soggy cat out.. (early days)
In the evening we watched some telly with a eager cat trying to get back out... 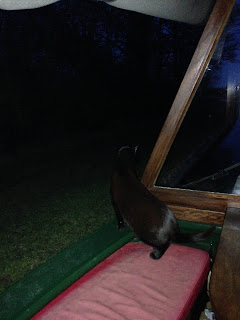 Hi both, so good to see you cruising again. Have you considered getting Tooter a florescent collar so that you can see him in the dark? I’m sure you can get ones that stretch for cats in case it gets caught on sticking out things when he’s out and about. Happy cruising. Carol and George. xx

Thanks Carol, what a good idea, going to give it a go and see if Tooty will wear one! The trouble is he loves goin out at dusk, and you just can't see him! Hope to see you sometime this year. Enjoy London x