Yes we have laid low for a few days and drowned in our sorrows. We can't understand why the canals we're so low with all these tears in the south. Len's funeral was yesterday and it turned into quite a big occasion. Del and his brothers carried Len to the church to the music of "You're my Best Friend" by Don Williams, and were greeted by 180 guest's. Al read the eulogy which she did with style and professionalism, and brother Cliff's children all did a small message for their grandad.. 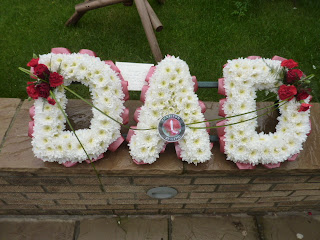 After a couple of hymns we made our way on to the crematorium, where we followed Del and his brother's into REM's "Everybody Hurts". Jay, another grandson, did a reading before we sat and listened to Len's favourite country song "Who Needs Pictures with a Memory like mine" by Brad Paisley. We then walked out to be greeted by the fantastic array of flowers to the music Simply the Best by Tina Turner. 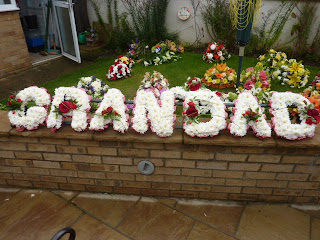 The Wake was held at Westgate Pavilion right on the sea front, a favourite spot of Len's. We all sat listening to Len's favourite songs eating his favourite food (including his cakes). On the stage we had transported all his flowers and in the middle was a projector screen showing all the photos of all his friends and family. The sun had been over us all day and in the afternoon we walked down to the waters edge and let of fifty balloons all with messages to Len on them and we watched them go high into the blue sky until they were out of sight, it was lovely! 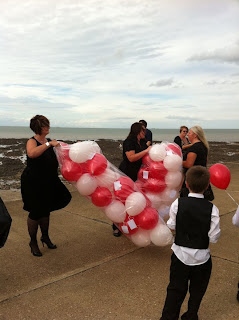 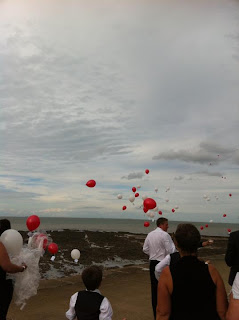 After we had finished at the pavilion we walked over to The Swan pub to toast one last time for Len, and as we did so, we just watched the most amazing sunset; another fabulous memory.

We then got the flowers back to the bungalow and we had a small shower from the sky to water them, and a rainbow appeared.

Thanks Dad for a Fantastic Day which everyone enjoyed, it was sad but happy at the same time.
You have been a fabulous mentor for our family and your memories will always live on!!!! 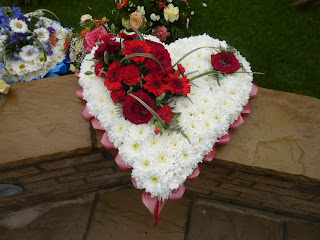 yes yesterday was a sad day mixed with some joy but to say goodbye to len on such a sunny day was without doubt one he would have enjoyed.
our memories will live on
thankyou ali & del and love to all the family
xxxx

What a send off, Respect, Love, Admiration you name it, it was present in abundance by all who he knew and loved and I am sure he would have been looking down and LOVED every minute of it.

Thanks guys for your lovely comments.. The day was only made so special by the people Len (my Dad) had around him. He has been a hub in family and friends we have, that will be sadly missed... x

It sounds like it was as perfect as it could have been for Len, even though it was a sad day for you all.. You have some wonderful memories. Love and Hugss xx