Al stayed down in Whitstable in Kent on the Saturday while Del just pottered about on Derwent6. She had a great time spending time with Zoe on her Birthday and seeing friend Suzi and even little Liberty (Zoe's granddaughter) joined in.. 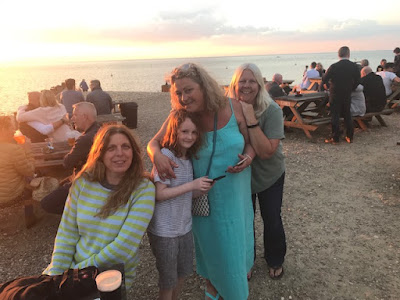 After the afternoon at the pub on the beach, they carried on celebrating with a BBQ back at Zoe's. Meanwhile Del went up the pub in Lower Heyford, as they had a open mic night going on but it turned out to be a bit of a let down, but the drink helped as he met up with a fellow boater for a drinking session.

Al came back on Sunday just after the Monaco Grand Prix and a good catch up was in order.. We also planned about moving from here as we had been here eleven days (and still hadn't had to run the engine). Its funny how you just get the urge to move and feel great when you do. We have nothing on now till next weekend so time to push on..
Posted by Del and Al at 10:20 PM