After walking round with a torch all night and watching the battery gauge drop, we decided to turn the fridge off as it was still very cold outside.. Al put some stuff in the engine room where it was coldest and we just kept phoning Beta for an update.. They sent us some information on what needed to be done with this modified kit and it appears you need to fit a clamp on the end of the crankshaft to stop the nut coming undone.. 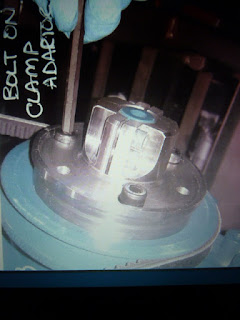 As the batteries got lower we needed to get some charge in them somehow and we had had a couple of kind offers for the use of a separate generator to link up with the inverter which would charge them.. Terry off nb Aqualady was moored in front of us and we linked our two cables together and this gave us some power to the batteries.. 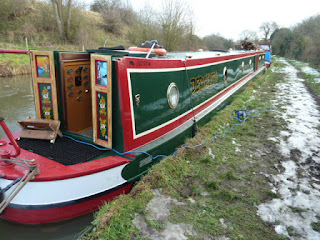 Meanwhile we were still talking to Beta, who were very helpful by the way, we were even getting emails at eight o'clock at night.. It ended up that the pulley had been made and a courier would be out first thing in the morning, once payment had been made.. This was a massive relief and together with  watching the needle rise on the gauge, we celebrated by going up the pub and grabbing something to eat. By doing this we also didn't need to use our batteries! It was back and straight to bed for us, still apprehensive about how tomorrow would go.....
﻿
Posted by Del and Al at 11:23 PM