After a day like yesterday you would think that we would take it a bit easy today. But we were up and out by 10.00am and got the bus into Rugby..  Del found out that he needed some decent walking boots and as Millets had a 30% discount it was rude not to make the most of it.. We got a few Christmas cards and other bits and then jumped on the bus to Elliot's field and went to the cinema. Al wanted to see Paddington 2 which Del wasn't bothered about but I suppose its called Love! 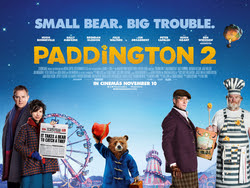 First we went to Frankie and Benny's where we had a couple of vouchers to get Del a free meal and also a free drink, it ended up costing us just nine pounds... The film had a load of stars in it and was Al's cup of tea. Del just thought it was ok, and a good Christmas film..
We got the bus back to Derwent6 just before it got dark.........phew!
Posted by Del and Al at 8:27 PM