So our first morning in Liverpool and we decided to go out for breakfast and left it to Graham to sort out where we were going, and we ended up at a Turkish restaurant called Shiraz, which did a brilliant full English for a fiver. From here we went to the Cavern, a must in Liverpool, where we watched a guy singing Beatles tracks. Loads were in there from the Disney Cruise Ship that had arrived this morning, including a professional singer off the ship who cried living his dream of singing in the Cavern. The Cavern was well worth seeing, almost a mini Hard Rock with so much more history.
It was then on to do some sightseeing, and we thought it might be a good thing to see the Disney ship and we then wandered round the docks and ended up going to The Liverpool Museum of Life. We then got a call from Marky to say his mate Chris had turned up at the Baltic Fleet, a fantastic pub in the docks. 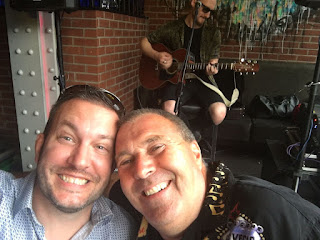 This pub used to serve all the sailors at the docks and had its own Brewery underneath in the cellars. It even had a tunnel linked to the red light district of Liverpool where the girls could get to and from the pub safely with their sailor of choice!
We then went back to Derwent6 and chilled on the bow for a few hours, looking across the Dock. 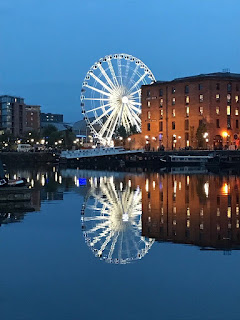 We all fancied eating Mexican and went over to China Town, of all places and found one, Sapporo, and the food was superb.
Posted by Del and Al at 10:43 AM