We got up late Sunday from our long day on Saturday after Del had got back from his Duxford weekend and Al had been shopping and done the boat cleaning most of the day, still finding time to read her book. So on Monday, Del had some work to do, as the brasses needed doing and Derwent6 was covered in dust from all the good weather we had been having..  It was a lovely bright morning and the sun was strong again so a early start meant he could get a lot done in slightly cooler weather..

Al had arranged to meet up with her friend Joy again in Reading as she is so close, so she left at 10.00am in the hope to get some more shopping in first.. Al also found some vouchers on line to print off, so they both got a free cocktail in Miller and Carter and ended up having some lunch there.. 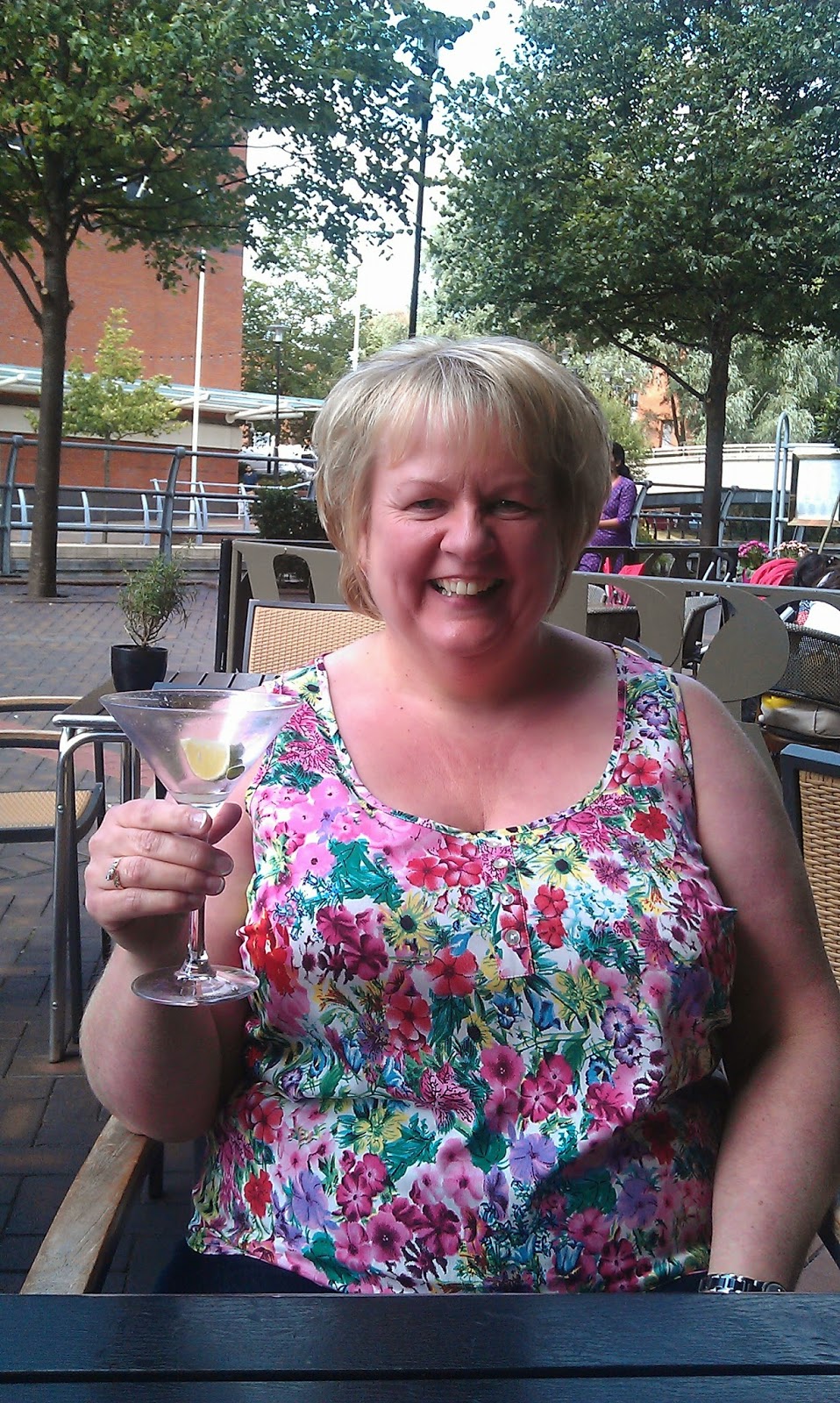 It got too hot by lunchtime for Del to carry on with the brasses and he did a couple of jobs on Derwent6 until 4.00pm when a boat pulled up in front of us.. It was Doug and James on n.b. Chance, it was lovely to see them.. They were stocked up with food from their Tesco's stop and they had brought a load of BBQ stuff. 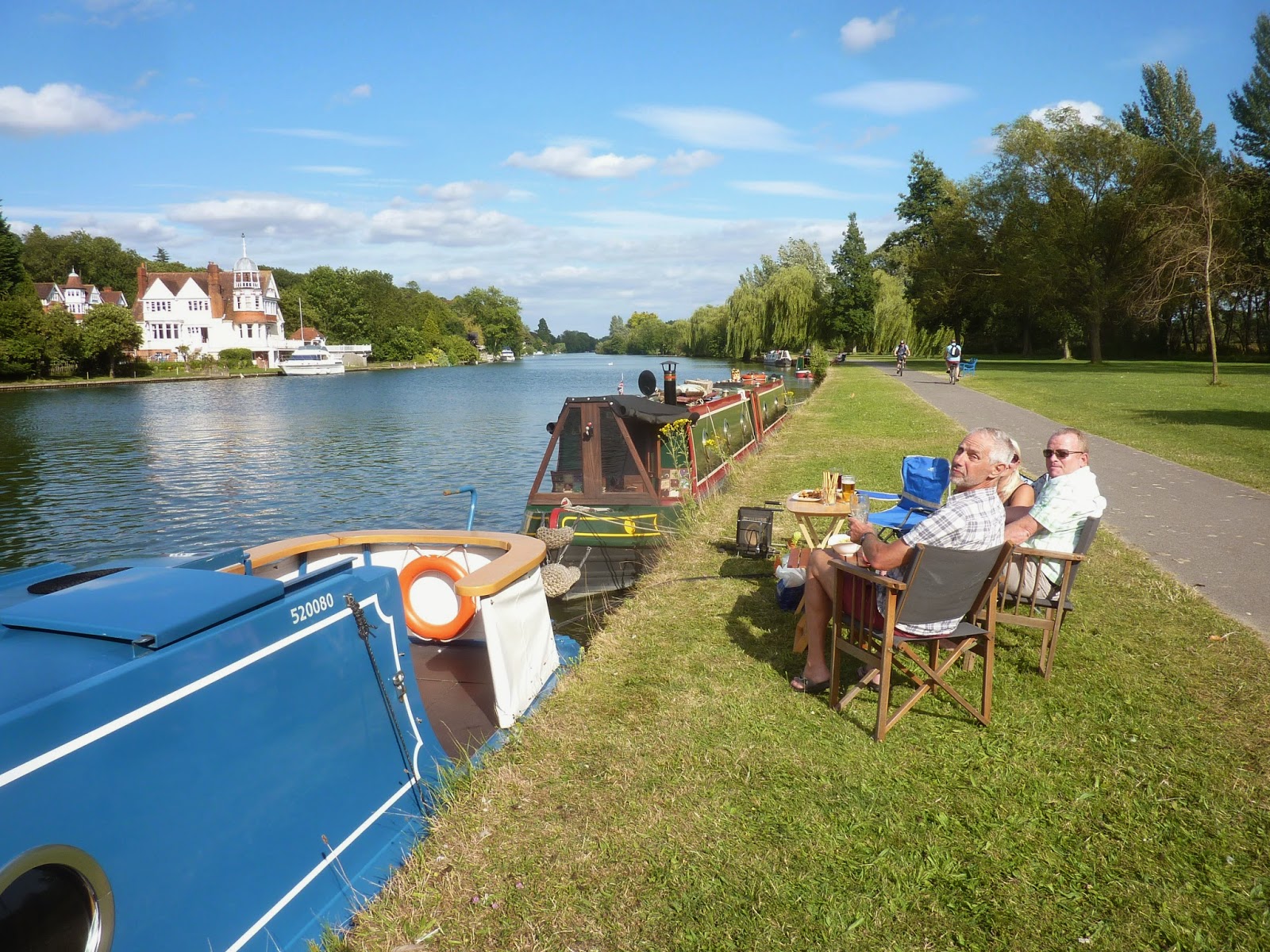 We split the cost with them and soon had the chairs and tables out, loaded with nibbles and drinks, while Del got to work on the Barbie.. 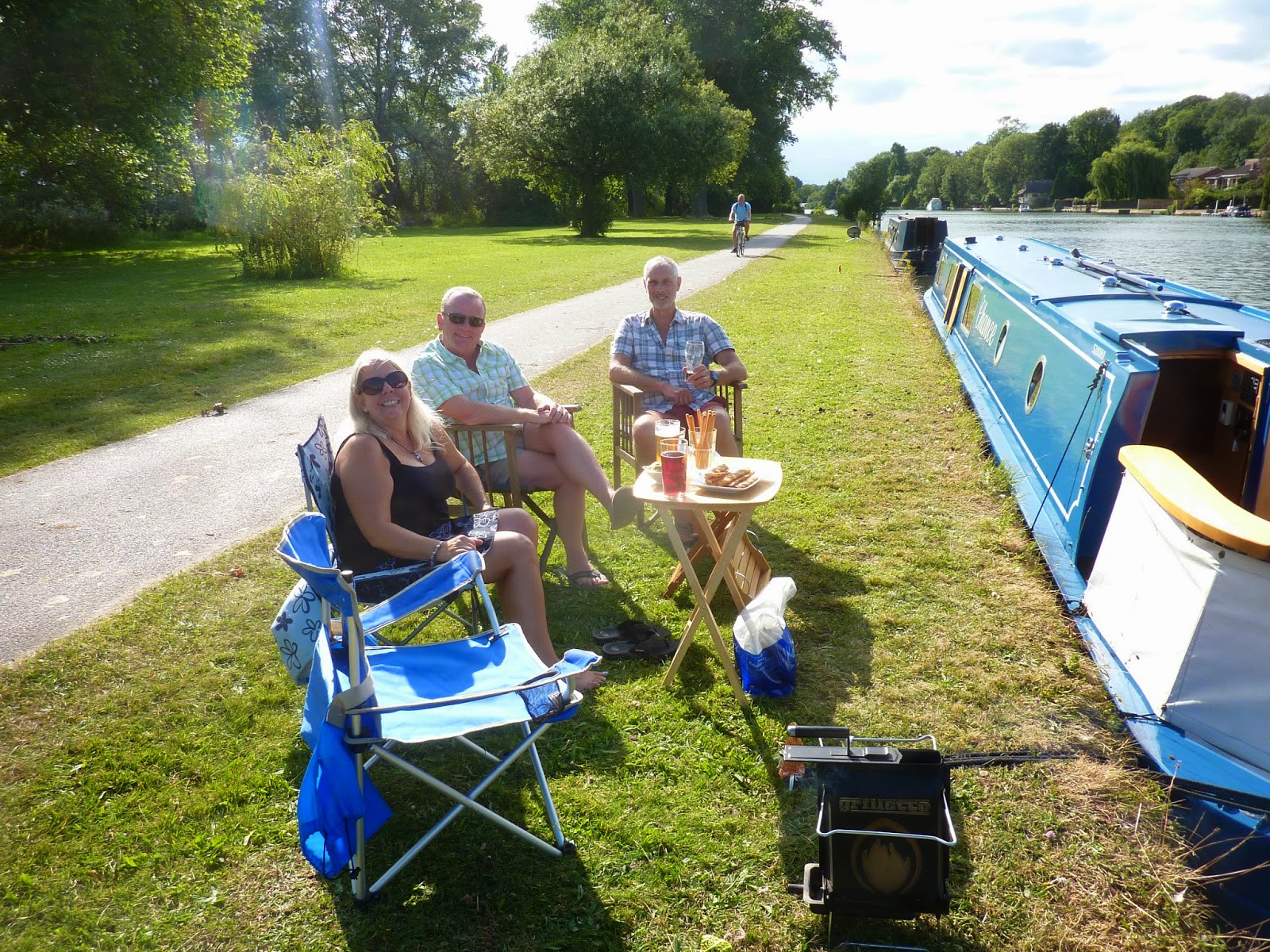 The only problem was when you light a BBQ the sun always goes in but it didn't stop us eating some really good food and drink with them.. we also had a good catch up with everything that had gone on and if you read both our blogs you will know we had plenty to talk about..  Anyway did it finish there, no way, It was back to Derwent6 for what can only be described as a Disco.. 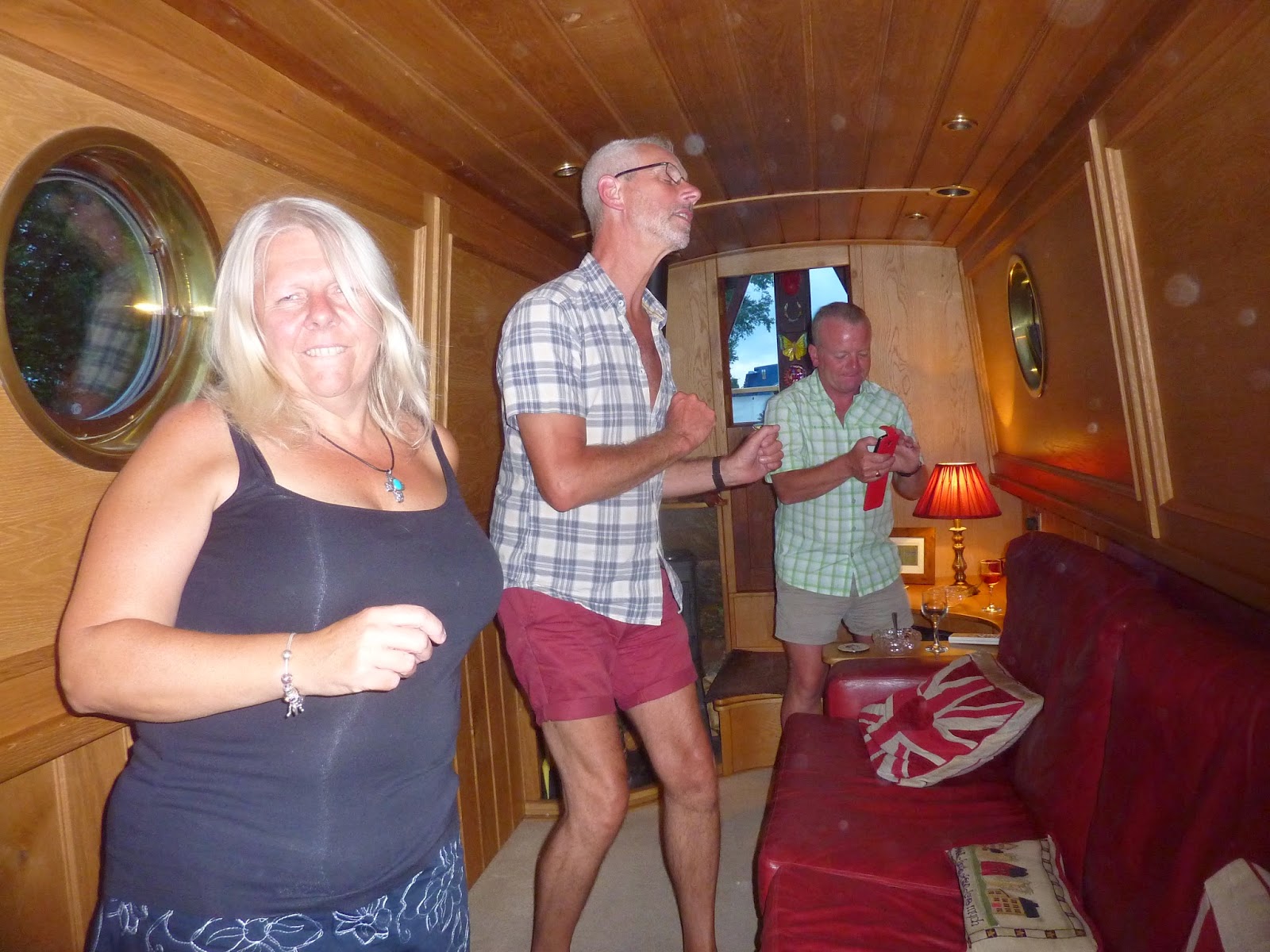 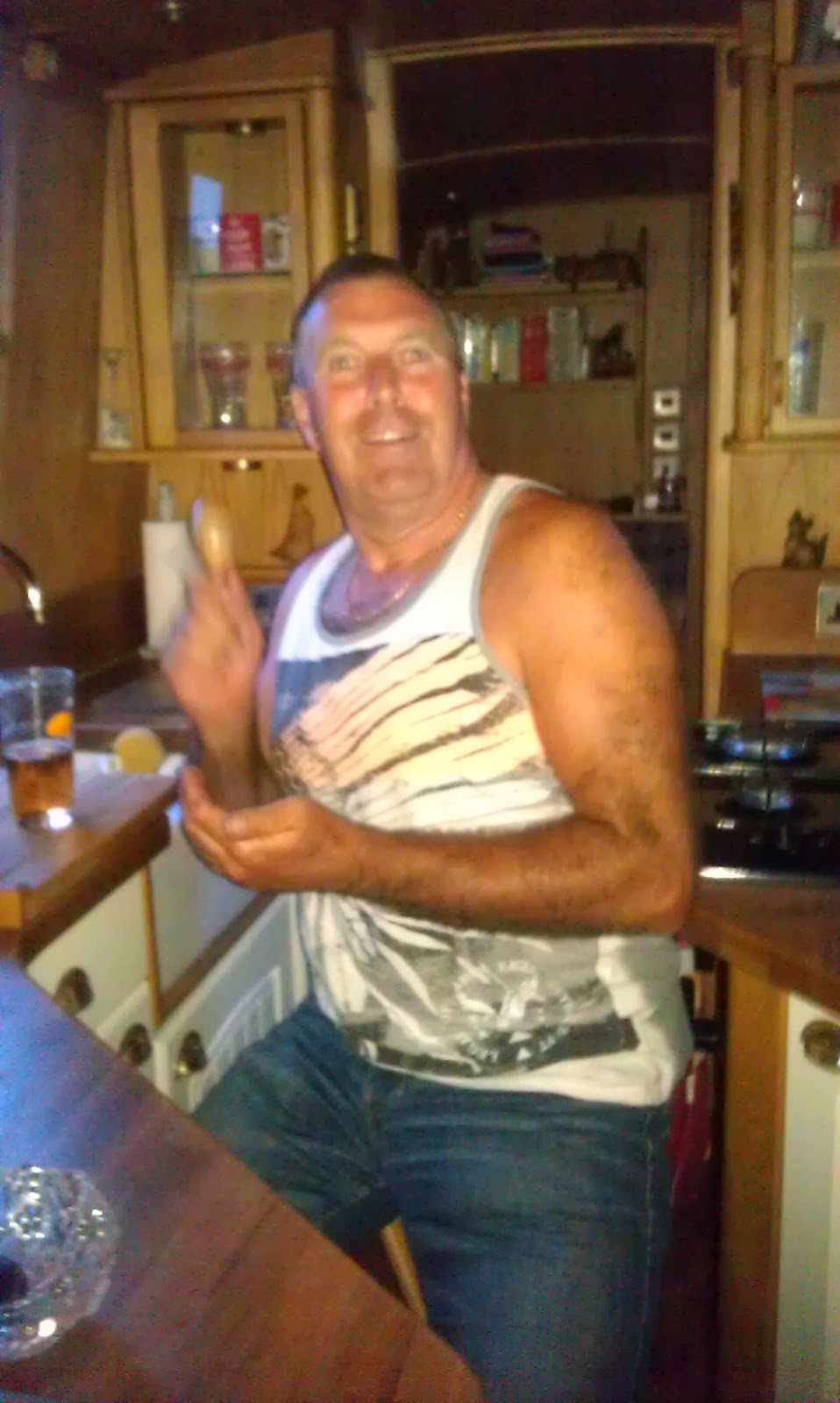 While Del and James put away the stuff on the towpath and Del cleaned the BBQ, Al and Doug were dancing in the saloon to 80's hits at full volume making ripples in the water..
We had a great time boogieing the night away till we dropped.. After our long days and full tummies we were knackered after 10.30pm so after just a fantastic day, we both crashed out to the applause of any boats near us. Thanks guys for another great afternoon and evening..
Posted by Del and Al at 10:12 PM

Oh my oh my you guys sure know how to party. Great disco lights too but why no video of Del dancing then!