We woke up to a lot of commotion going on over the field next to us, and it turned out to be a boot fair. Boot fairs aren't our thing but as we had nothing else to do we thought we would take a look around..  It was bigger than we though and also incorporated a market with food stalls. 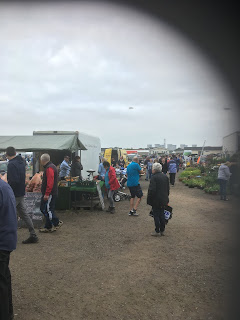 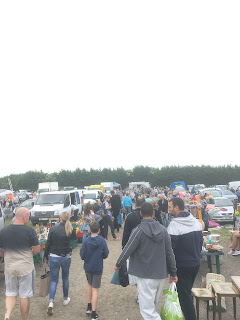 It still turned out to be a bit tacky for us and we came away with a couple of punnets of Strawberries. It was a lovely day again, we have been so lucky with the weather. It was rude not to stop off at the pub on the way back, though Al is still on lime and soda's.
Del did some painting in the afternoon to the side doors and hand rails..
The following day we had a lay in and then went to the Hume Arms for Sunday lunch. 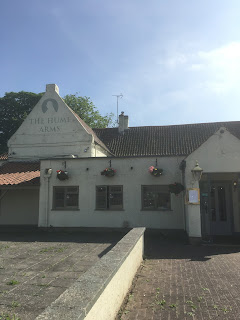 They used to do a carvery but it has changed hands and they have stopped doing it.. It was all a bit new and the staff weren't up to speed but we still enjoyed it.. The mile back to Derwent6 did us good to walk things off and then we watched the Grand Prix.. Relaxing day really. It should be busy tomorrow as we want to move and also we might hear about our battery fault.
Posted by Del and Al at 6:19 PM