It's now or Nether Hayford

We didn't have a good night so was up early and thought we might as well just get through the tunnel. We left at 7.15am and crept up to the entrance and fired up the lamp on the front of Derwent6. We were surprised to see loads of extra new moorings right up to the winding hole by the tunnel. 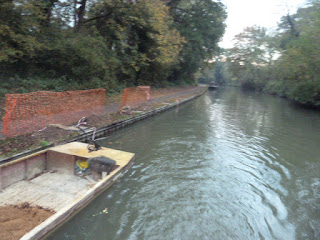 It started well and nothing was ahead of us, but things soon started to get wet, in fact one section was like a bucket of water was being poured down the tunnel vents and a quick swerve at least missed Del getting soaked. It did get a bit cold towards the middle and we were surprised to see another boat come in behind us.. 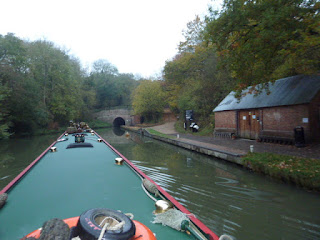 The light on the bow was showing up the bats hanging from the tunnel roof and the white stalactites helped light up the brickwork. As the light at the end got bigger we soon emerged into daylight.
With the water like a mirror we made our way up to the Northampton Arm.
There were at least six moorings on the 14 days moorings here, so we can only assume that there must be a CaRT warden coming through today, these are normally chocker! 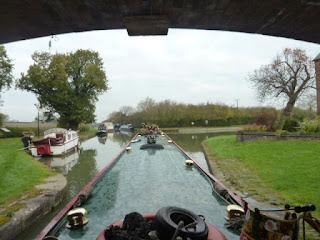 We carried on in quite chilly weather and after getting damp in the tunnel felt quite cold. 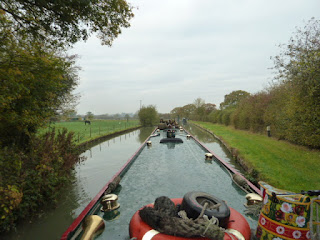 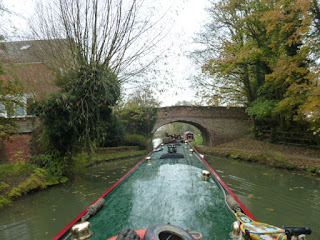 It is lovely countryside round Gaton and Bugbrooke, but our bones were getting the best of us and we had to look for somewhere to stop.. 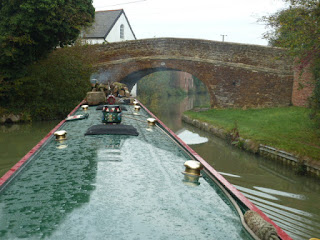 We managed to get back on ours and Tooty's favourite mooring by Nether Hayford with all good signals. 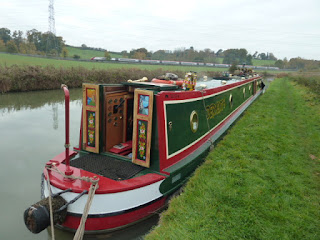 Del first had to wipe the roof down from the tunnel water which does stain the paintwork if not removed. Luckily the roof was damp when we went into the tunnel so it was OK to wait until we moored up.
Al lit the fire to warm us both up and then we had some lunch and then Del set about chopping some wood for the front locker as a cold spell was due over the weekend. The funny thing is the weather had warmed up while he was doing it.. So now loaded with kindling again and the locker full of Silver Burch and Oak we were good to go, but Del's aching bones weren't.
After sitting on the sofa for an hour he couldn't move, nothing a nice shower can't sort out with some soft tracky bottoms, the football, and a long cool beer in front of the fire. Ahhhhh! Just love this life!
Posted by Del and Al at 12:33 PM