As expected Al didn't sleep, until 4.00am when Tooty came running across the roof and down the cratch cover and in.. It was at this point we were found to be leaning to port and the water levels had dropped about 20cm. Del got out and untied the ropes a little, but it was going to be a 'look at in the morning' thing..
At daylight we could hear the pitter patter of the rain on the roof, at least that should help the water levels. When the rain stopped for a bit Del could see Mark struggling with his rudder. It had gone down on something and lifted it up and off of the skeg. After a lot of messing about and some help
from a boater with an underwater camera, there was no option but for Mark to get in and help Del locate the lower bearing.. 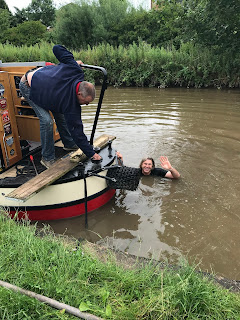 Can you believe that boats were still going past us too fast even though he was in the water adjusting the rudder. After a lot of locating it dropped into place and needed just a few slight taps to seat it back into position..
It felt a good job well done with only a bit of touching up to do on the paintwork.. 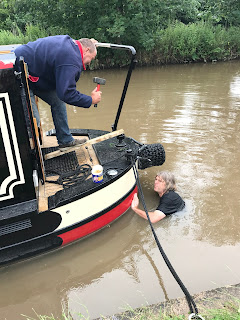 It started to rain again so we had a bit of lunch before we set off again on the Big Trip..
We could see a bit of sunshine trying to peep through so set off to the Big Lock on the system. 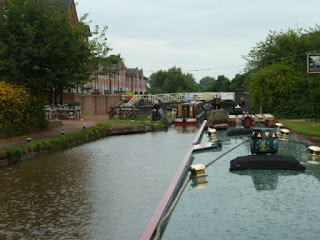 It's called this because its a double lock which has single locks before and after it, don't know why! 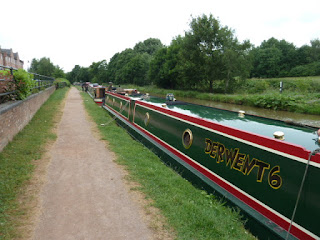 After this lock we got water, just a splash and go for Derwent6, and we set off again. 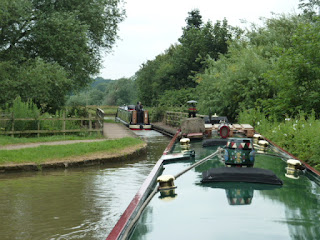 We twisted and turned to the Aqueduct and then through the woods to some lovely moorings and large expanses of water marked out by bollards. 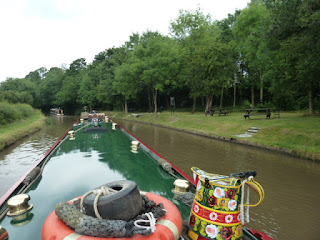 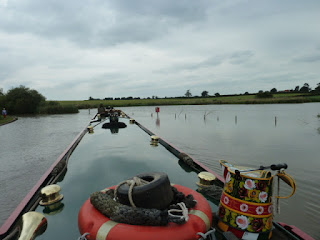 On our journey it was sad to see a sunken narrowboat, something we all fear when we have everything we own on board, including Del's underpants. 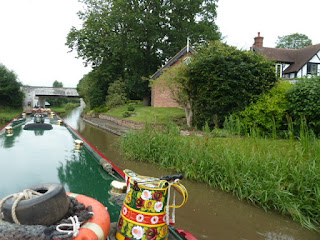 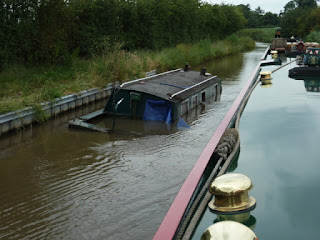 We have got to say this was a very pretty section and we continued to the next expanse of water and moored up in a bit of a special mooring. 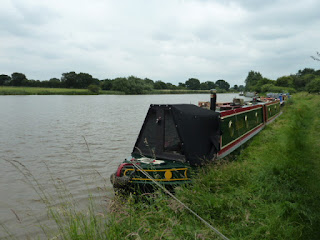 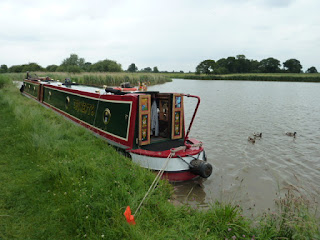 The views were astounding and we had a phone signal and telly, though internet was a bit sticky for the first time in ages.. 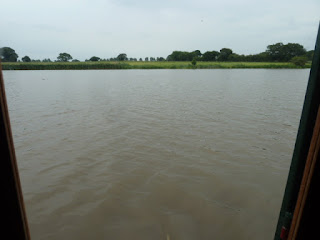 Wow! You two always get in on all the excitement! I never knew the tiller could come unstuck like Mark's did so it is good to know about this. One more thing to watch out for on the way...glad your lovely kitty came home and your moorings are splendid. No one else around for miles it appears either.

Solar panels should be sorted by the second week in July and then I shall be off towards Rugby and making my way to the T & M.

Love to you both,