We were up early after a very warm night..  Whoopee! the Thames today.. We had high tide today at 12.19pm so we needed to be at Thames Lock at 10.30am to catch the incoming tide.. We left at 8.45am and then filled with water. 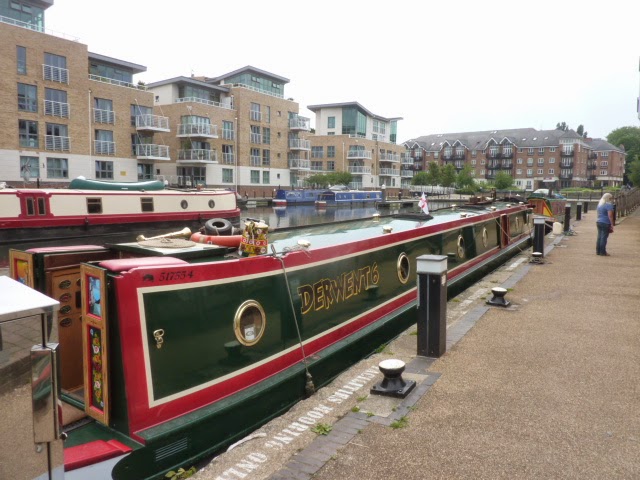 Another boat was going down with us today and was already in the lock and waiting for us, it was their first time and they were going to follow us.. 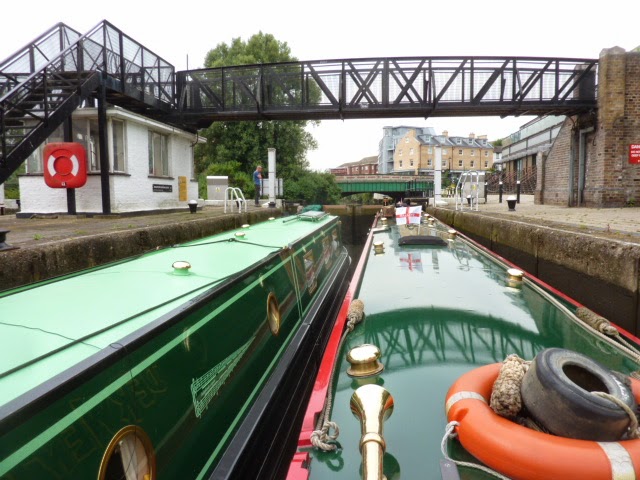 We got to the Thames Lock at 9.30am and waiting for the lock keeper to arrive, put our life jackets on. The gates were opened for us at 10.15am and we were let out to get on with it really.. can I just say we weren't asked if we had communication, an anchor, or if we knew any of the rules like horn signals or which bridge holes to take. We were asked which direction we were going, and have a good trip.. Gulp!
Well today was the perfect day for cruising the Thames, warm, calm, and the tide in our favour. 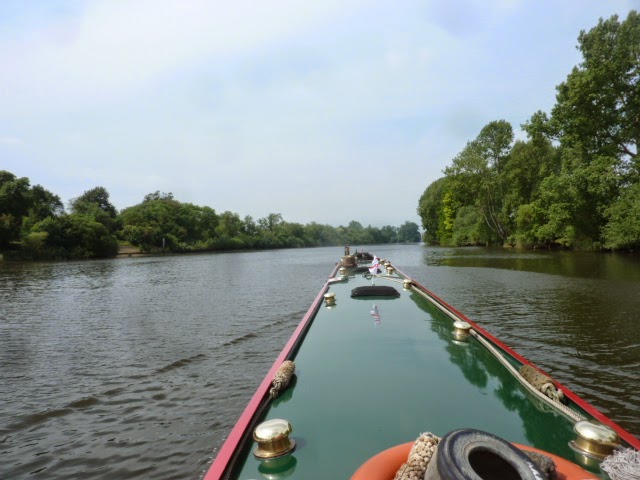 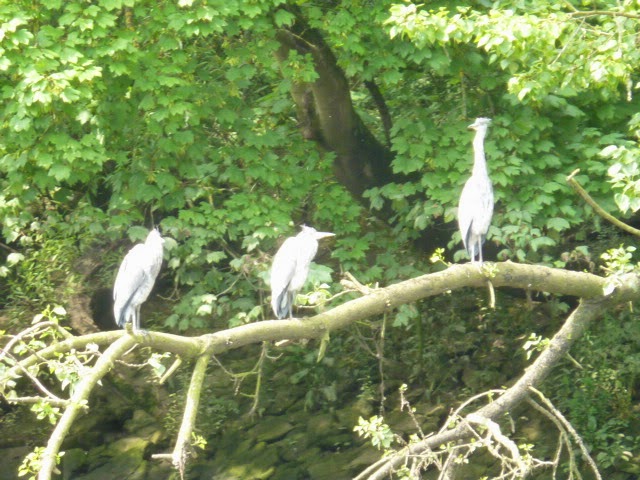 Last time Derwent6 went backwards when we hit the fast flow of the out going tide but this time it assisted us making it very efficient cruising. 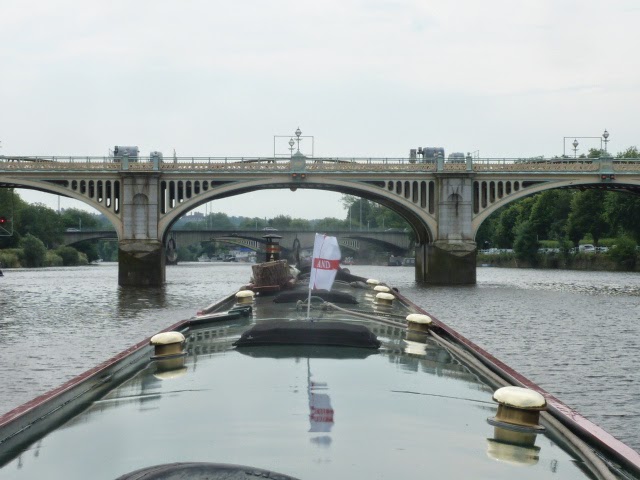 In fact it was also a lot quicker than normal so we must have hit it just right. 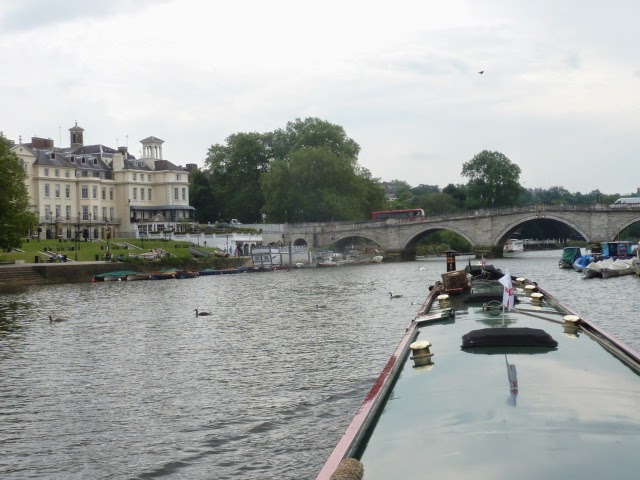 We soon got to Teddington Lock and the lights were green to go straight in and we tied up by the lock gates to allow other boats to pull in behind us. 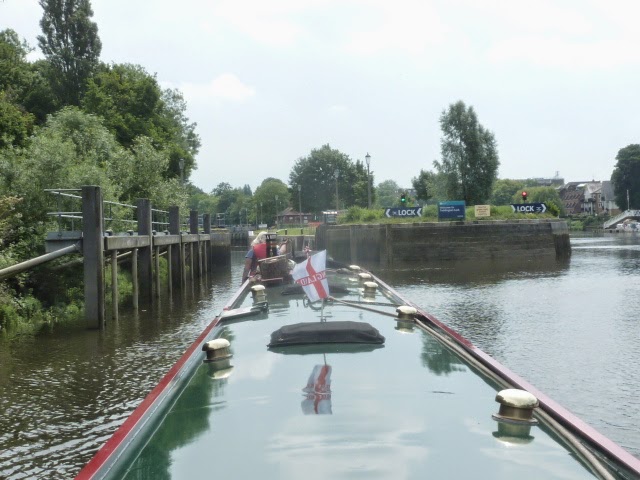 No 'hello' or 'good morning' here....The first thing we got from this (pigheaded) lock keeper was "come on can we hurry up".. Not a good thing to say to two narrowboats in his lock. Al tied the bow of Derwent6 and then helped the boat we were with to moor up by putting their ropes over the bollards, all the time being watched by the lock keeper and a volunteer. Before Al could get back, he had opened the lock paddles fully, and Derwent6 got pushed away from the side and Del had to let go of the rope to stop us tipping on our side, "bloody prat" Del shouted..  Derwent6 hit the other side with a bang, so more touching up required..  Del then let him have it, saying he was responsible for this lock and the boats in it and hadn't given us any help what so ever.. He then obviously realised we might report him and was very apologetic. Hmm not a good start.
We parted from the other boat as they had to buy a licence and we headed on to Kingston.. There were loads of moorings here and we will be stopping here on our way back.. It is so quiet here and we only passed a couple of boats one of which was the paddle steamer. 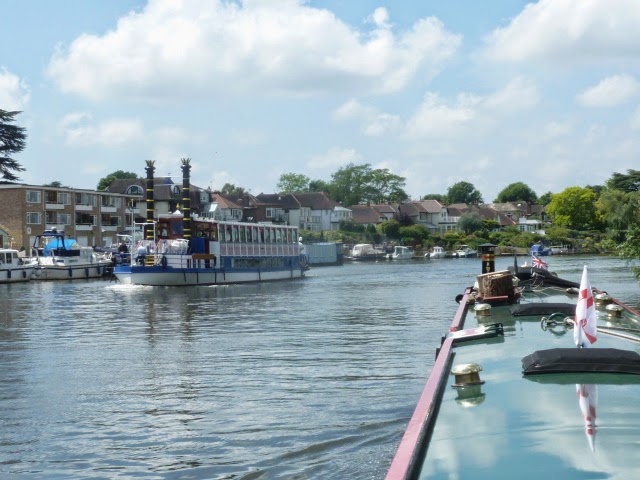 It was harder going now with a bit of a breeze in our faces and a stronger current, but Derwent6 cut its way through with ease, with the Beta 50 working underneath us. We decided to stop at the Hampton Court moorings as we wanted to take in some of this sunshine, there were loads of spaces.. 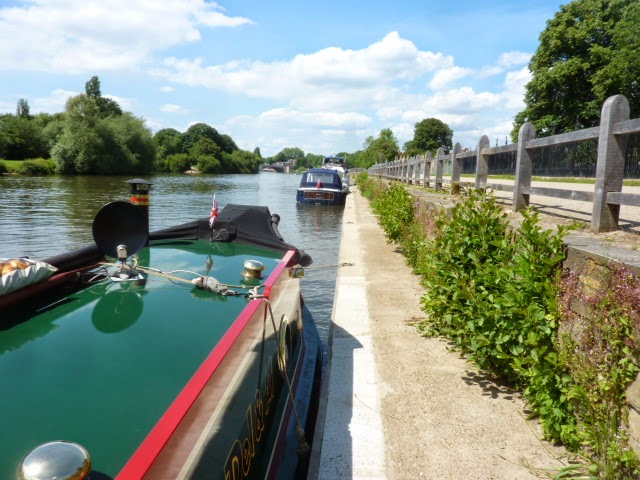 They have also taken to charging narrowboats double, if we overstay.. ( Derwent6 is now only 60 foot) 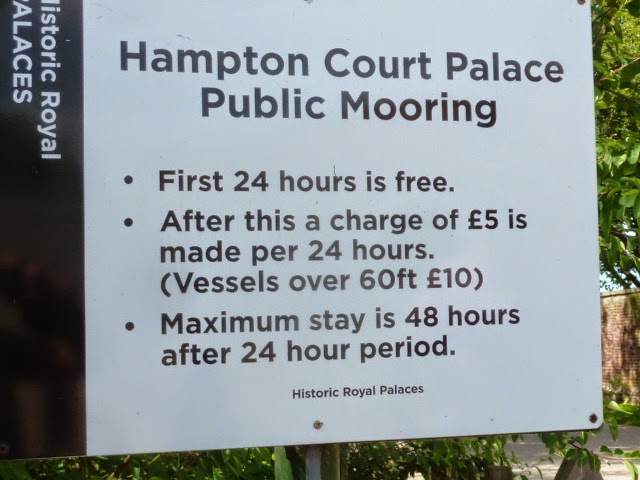 Al likes the Butchers here and wanted some of his nice sausages so we walked into town. Derwent6 looks so small on this big river 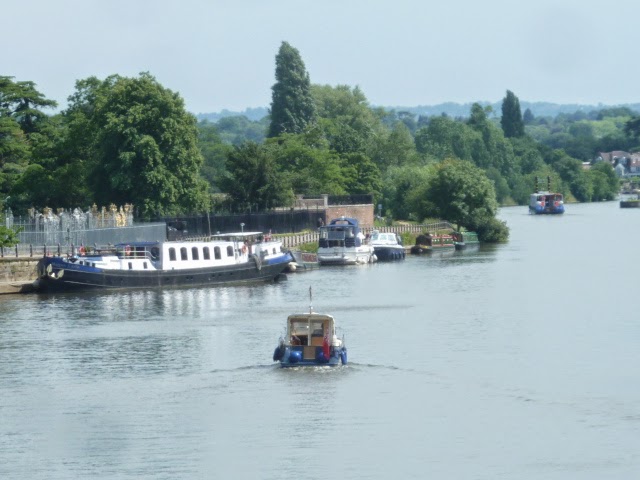 Well everything closes on a Monday so that was a waste of time lol, still it stretched our legs a bit, but Al never got her sausages. 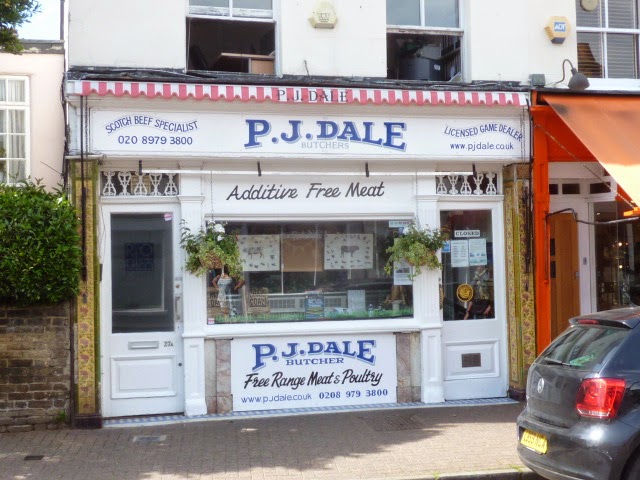 We had a quick look round Hampton Court before heading back.. 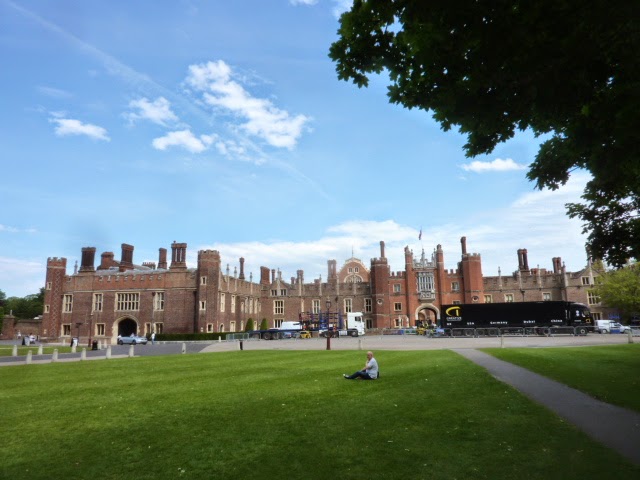 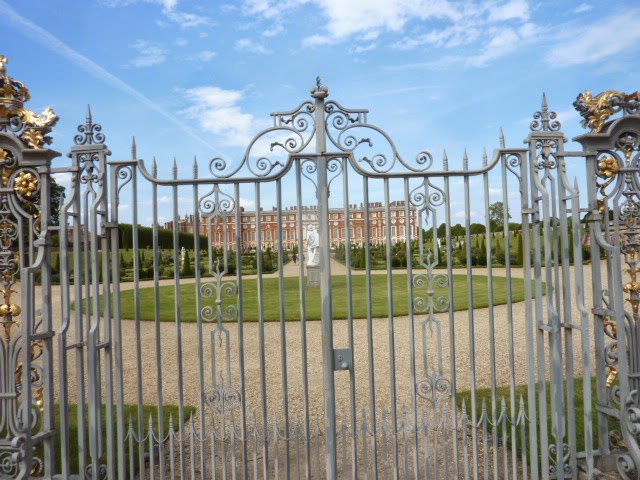 We got back to Derwent6 and as we had nibbles in the cratch with a beer the weather started to change.. After a glorious day, black clouds came over and soon it poured down.. although we didn't get any thunder and lightening.... Good old British weather! Its great to be back on the Thames ...... 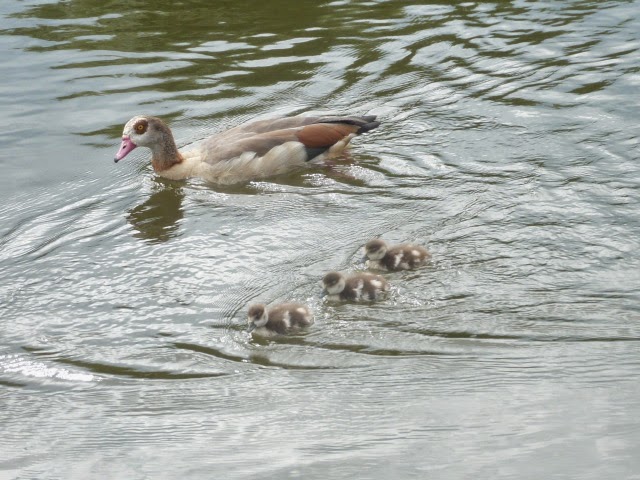