Al woke up on her Birthday still not feeling the ticket but she was determined to enjoy the day. After opening a few presents in bed while Del did breakfast, she tried to get up and make the most of the beautiful day outside. She sat in the cratch and relaxed hoping the tablets would kick in. Del did some brasses as always.
Del had arranged some plans for the day, but things had to change, as it was soon clear that it would be too much.
So the plan was that we would let Al get some more rest and try and go out at 5.00pm for a bite to eat at the Plough Inn which was only a 100 metres from Derwent6.
Al had got a couple of hours sleep and then she got ready to go out. We took a slow walk to the pub and when she was sitting down felt alright..
We had a lovely meal and Al started on lime and soda's. She has never had an adult birthday without having a good drink and she decided to try a large rose wine.
This worked and she felt a lot better, so we paid up and made the decision to try and make Lichfield, so Del ordered a taxi.
Things were ok on the journey and we were dropped right outside the Garrick Theatre where Del had brought tickets for the performance of "Half a Sixpence" 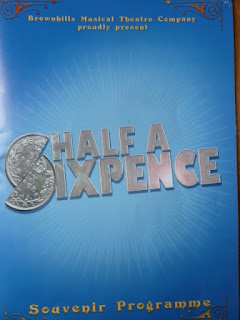 We really enjoyed it as it was a small production and we felt a real part of the show...
We got straight back in a cab and took the small walk back to Derwent6, lets see how she feels in the morning.