It was a cold night and when we pulled out the bungs we could see why, we were frozen in.. 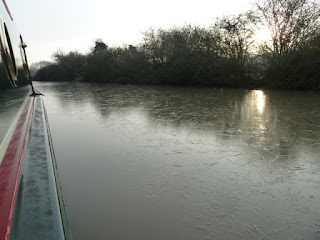 Oh well that has put the mockers on us moving early.. The plan was to leave at 8.30am to get to the Sutton Wharf Café for breakfast, turn and then come back to where we are..
We waited for the ice to melt and Del did some more brasses, as he does..
We ended up leaving at 11.00am after a boat had gone through breaking ice and it had melted enough for it not to harm Derwent6..
It was a lovely slow one hour cruise in the sunshine to Sutton Cheney, The water suddenly got very shallow past this point and slow was the order of the day. 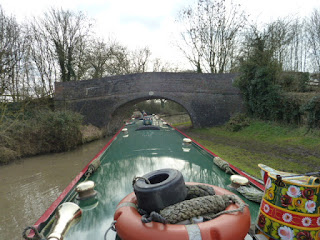 We did pass one boat and grounded, we take it this section hasn't been dredged as the water was flowing over the weirs and looked full. We managed to turn ok and then moor on the one hour mooring point, and we soon got a table in the café over looking Derwent6.. 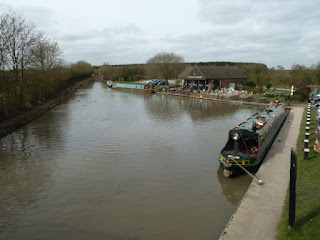 We missed breakfast by ten minutes, but we wasn't worried because lunch looked lovely.. 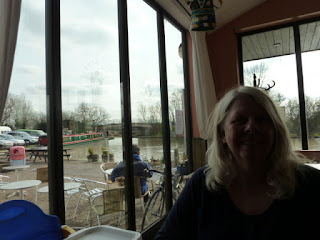 With full tummies we set off back towards Stoke Golding and we tried to moor in another spot a couple of times but couldn't get in because it was too shallow..   So it was back to where we had come from. 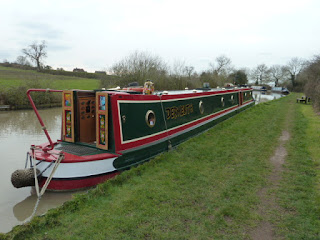 We then battened down the hatches for the wet weather approaching, and Del made up a hook for the cratch cover so Tooty could go in and out, but all he did was stick his head out until he was spooked and then run back in and sat on the sofa, you can see he has made himself feel at home.. 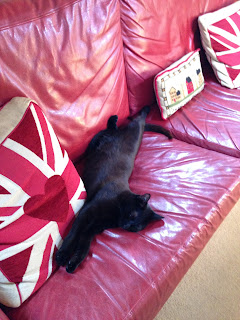 Al still won't let him out at night, because she is worried he might not come back quickly, and then she'll be up all night waiting for him.. Del tries to tell her he is a cat and will go where his food is, Del always comes back when he's hungry...
Posted by Del and Al at 11:01 AM