Brrrr it was a cold night last night.. Even the fire had trouble taking the chill off the boat and it was very difficult to pull the sheets back and get out of bed.. When the porthole liners were removed all we saw was white fields... With the central heating on for a hour and a cup of tea and the fire cranked right up we were soon warm and toasty.. 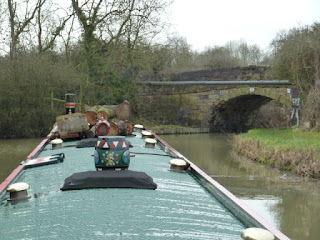 We pulled the pins at 8.45am and made our way towards Marston Junction and it wasn't long before we hit our first problem, ICE! 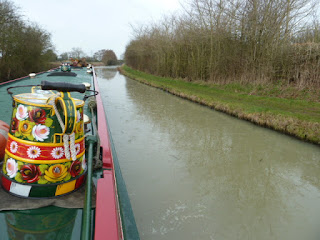 Where we were moored was fine, but in the open exposed places the canal was still frozen..  Derwent6 breaking Ice, that doesn't happen.. When we hit it, it was so thin it just melted into the water in front of us, phew!
It was still very cold, but very pleasant, as the sun exposed the green fields again. It was also very quiet as we hadn't met another boat and movement was scarce.. 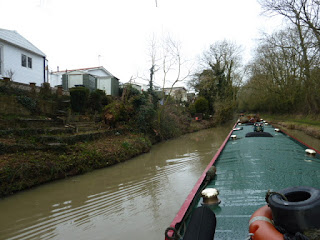 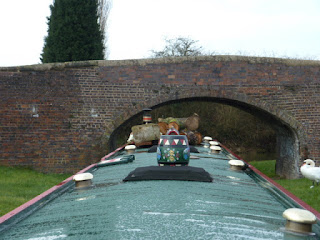 We got to the turn on the Coventry and that went smoothly, then we passed our first two boats on our way down to Hawkesbury Junction.. 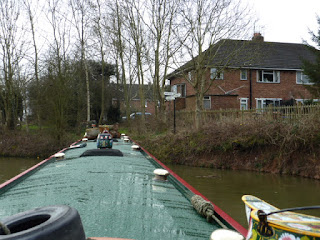 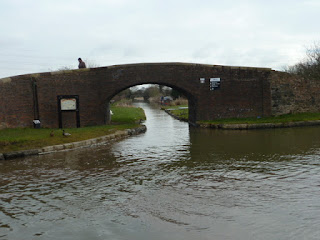 We moored on the seven day moorings (and there were loads of spaces) and Del walked round the corner to see if we could get on the moorings on the Oxford, there was loads of spaces there as well, in fact it was empty. Al took the windlass and got the stop lock ready while Del took the turn in front of The Greyhound pub.. 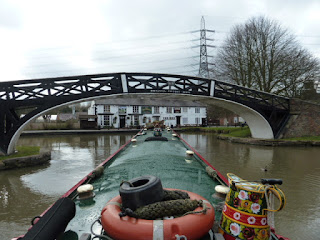 With the smell of beer we took no time in mooring up and getting ready for a Sunday pint or two.. 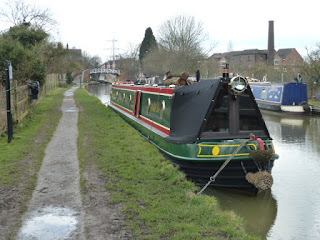 We had tried to book a table but no chance being Mothering Sunday, so we waited for the doors to open and got a table in the bar which was serving the full restaurant menu, touch!
We were not disappointed again, the Sunday Roast was to die for.. in fact we had starters, mains and dessert and come out of there totally stuffed, and fat... 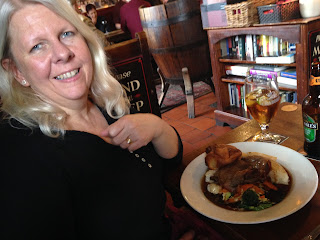 We walked the 100 metres back to Derwent6 and opened the doors to that lovely warmth and smell of the log burner, very inviting when your stomach is full, yep and you guessed it we were soon asleep on the sofa..
We surfaced an hour later and Del took the rubbish we had collected to the Refuge point, something lacking on the Ashby canal.. It started to turn really cold again so I think we will sit in front of the telly and watch a programme on cats, not that we need it..
Posted by Del and Al at 8:31 PM

Luvly jubbly, where there's a will there's a way, glad you enjoyed your fab roast lunch.
I like reading about the adventures of Tooty too.
Good luck with probate, we did most of my Dad's on the internet and saved the expence of solicitor's fees.
Looking forward to meeting you again when you move back aboard cruising.
bb oakfield.