We were up early and watching the Olympics and it turned out to be a Super Saturday with a gold from Lizzy Yarnold, the girl from West Kingsdown in Kent, together with us getting two bronze medals. This took up most of our day and we needed to go out in the evening.. We booked a table at The Bulls Head in Brinklow as there was a band on.
We got there at 7.30pm and had a great table by the band. The food was very good and not too pricey and the band came on at 9.00pm just before our desserts. 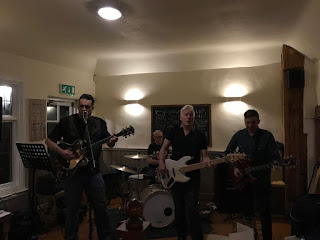 The band were called "One Six Twenty" and they played rockabilly and played it well. We got loads of 50's and 60's music which got us foot stomping. The drummer was a session player who had played for Yellow Dog and even Danny La Rue of all people.
We had a great time, singing along and rocking! 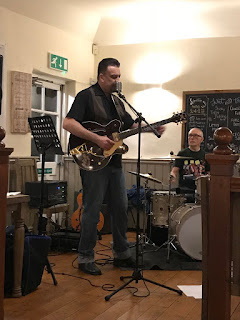 Eric from Brinklow marina gave us a lift back to Derwent6 and we got in at midnight, a good night!!
Posted by Del and Al at 11:15 AM